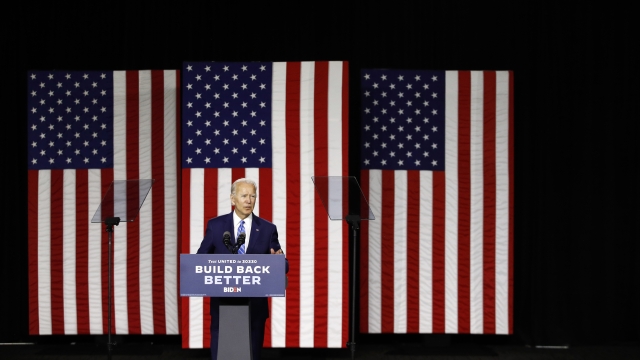 Biden set a target date of 2035 to make sweeping changes toward clean energy.

In a speech from his home state of Delaware, Biden set a target date of 2035 to make sweeping changes toward clean energy. In the next 15 years, he's calling for the elimination of carbon pollution from power plants and for 100% clean electricity.

Biden is calling for an expansion of solar and wind energy and reducing the use of fossil fuels.

The plan includes changes for the average American, including upgrading buildings and swapping out gas guzzling cars for more efficient ones. It endorses Senate Minority Leader Chuck Schumer's plan to offer vouchers to make the switch.

The former VP also included an overhaul of America's infrastructure in the plan, put together in part by a task force led by Senator Bernie Sanders and his allies. It's much more ambitious than the original plan the campaign proposed last summer. In fact, much of it would need congressional funding approval.

The Trump campaign accused Biden of appeasing the left with "disastrous policies." Biden did not say how he'd pay for the plan and left out major elements progressives have focused on, including a fracking ban.

Part of the Biden plan would require electric utilities to get power from cleaner sources. Some states, including Texas, already do this.

But, it's a game of tug of war. The moderate candidate continues to try to energize progressive voters within his party, while at the same time hoping to appeal to Republican voters.

The campaign released this ad Tuesday in Texas, where some polls show the typically ruby-red state could be in play in November. A CBS/YouGov poll released this week has President Trump ahead by only one point and well within the margin of error. He beat Hillary Clinton by nine points in 2016. Versions of the ad will also run in Arizona, Florida and North Carolina.