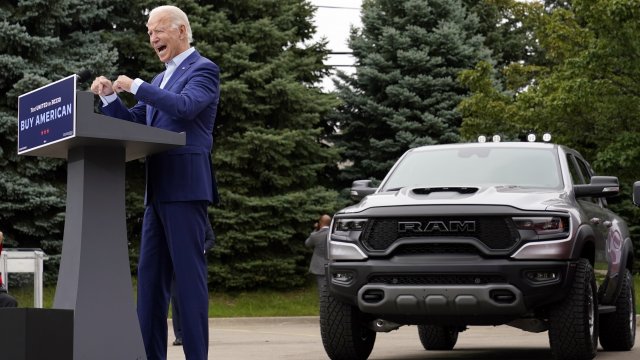 In Michigan, Democratic nominee Joe Biden unveiled a plan to end the offshoring of U.S. jobs, including tax breaks for companies.

Democratic presidential nominee Joe Biden told voters in Michigan Wednesday as president, he's going to make sure things bought in America are made here too.

"There's a better way. Make it in Michigan. Make it in America. Invest in places like Warren," said Biden.

He's talking about the practice of offshoring. It's when companies move parts of their manufacturing to countries so they can pay lower taxes. The Economic Policy Institute says 1,800 factories shut down here in the U-S between 2016 and 2018.

Biden's plan would change the tax code to encourage companies to stay in the U.S. He also would require 51% of materials be domestically made in order to get a "Made in America" stamp and use American ships to carry U.S. cargo.

The Democratic nominee used his speech to make the case President Trump let down workers by not handling this issue during his presidency.

But President Trump has also criticized offshoring, even telling voters Monday he's going to bar companies that outsource to China from winning federal contracts, and put tariffs on companies who participate in offshoring.

"We'll create 'Made in America' tax credits and bring our jobs back from china to the US. and we'll impose tariffs on companies that desert America to create jobs in China and other countries," the president said.

It's an important topic for voters in Michigan, a state that has lost numerous facilities to foreign opportunity. Congressman Dan Kildee, a Democrat who represents Flint, says a plan like Biden’s can preserve important American industries with a focus on the future.

"He doesn't want to just play defense with tariffs he wants us to get back in the game by having incentives for American made products," Kildee said. "The future is this and Biden understands that."

The Wolverine State again figures to be a crucial state in the race for the White House. A statewide poll released Tuesday has the former vice president up by 5 points, a CNBC poll has him up by 6.

And Biden continues to make the coronavirus a top issue of his campaign, accusing the president of "a life or death betrayal of the American people." A new book by Bob Woodward alleges the president purposely downplayed the seriousness of COVID-19 earlier this year. President Trump responded, saying he did not want to "create panic." He campaigns in Michigan on Thursday.