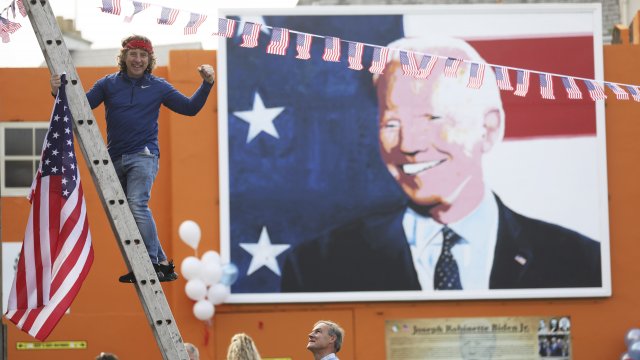 While most allies cheered the end of America's isolationism under President Trump, Russia, China, Mexico and Brazil stayed silent.

As supporters of President-elect Joe Biden celebrated his victory in the U.S., foreign leaders and people around the world expressed hope and relief.

"Some behaviors of Trump were unacceptable during four years and I think democracy in the United States and in the world will be better," said a Paris resident.

Paris Mayor Anne Hidalgo's tweet "welcome back America" summed up the jubilant mood among many western allies longing for the end of President Trump's disruptive and isolationist foreign policies.

"There's almost the feeling of getting a new chance to basically rebuild transatlantic relations, because they have certainly reached a low point over the past years," said Daniela Schwarzer, the director of the German Council on Foreign Relations.

He also withdrew from major international agreements such as the Paris climate accord and the Iran nuclear deal while pressuring NATO members to chip in more on defense.

Looking forward to a Biden administration, America's allies were most cheerful about the prospect of collaborating once more with the U.S. on mitigating climate change.

"He would put America back in the lead for tackling climate change," said Desmond Majekodunmi, a Nigerian environmentalist and the chairman of Lagos State Urban Forest and Animal Shelter Initiative.

Celebratory messages from world leaders poured in on Saturday and Saturday — many noting the historic achievement of Vice President-elect Kamala Harris.

"I congratulate Kamala Harris on being the first female vice president, as she will become, in the history of the United States," said United Kingdom Prime Minister Boris Johnson.

"It will be a symbol for many women to look up to this important person in the world, just like many in Germany find it totally normal that there is a female chancellor," added Schwarzer.

Although President Trump has the support of most Israelis for giving the country a series of diplomatic gifts, thousands of demonstrators hailed Biden's victory and called for Netanyahu's resignation.

Other world leaders with close relationships to President Trump — such as those of Mexico, Brazil and Turkey — remained silent.

Iran's president called on Biden to return the 2015 nuclear deal with other world powers.

And while leaders in China and Russia stayed quiet, some in those countries cautiously hoped for a new level of cooperation.