Biden: 'We should pay attention' to MLK's legacy 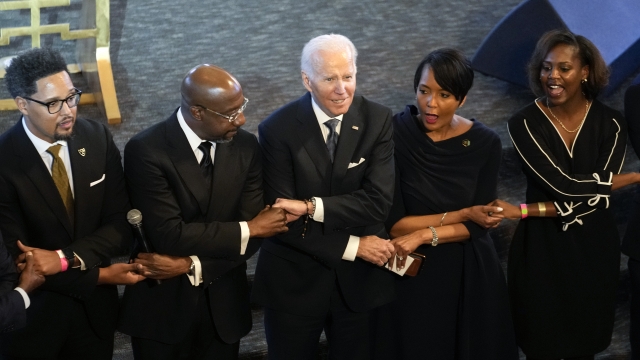 Biden said his message on Dr. Martin Luther King's birthday is to “choose democracy over autocracy, a beloved community over chaos."

“We have to choose a community over chaos, are we that people are going to choose love over hate? These are the vital questions of our time and the reason why I'm here as your president. I believe Dr. King's life and legacy show us the way we should pay attention,” said President Biden.

He spoke about King’s life and legacy, also noting he was one of his “only political heroes.”

"I often think of the question that Dr. King asked us all those years ago. I think it's important you all remember. I think it's important. The nation remembered. He said, where do we go from here? That's a quote,” said President Biden. “Where do we go from here? Well, my message and nation on this day as we go forward, we go together when we choose democracy over autocracy, a beloved community over chaos. We choose believers in the dreams to be doers, to be unafraid, always keeping the faith."

The president was invited by the current pastor of Ebenezer Baptist Church, Democratic Senator Raphael Warnock, who has been the senior pastor there since 2005.

Martin Luther King was assassinated in 1968 in Memphis, Tennessee. The sermon came on what would have been king’s 94th birthday.

This is just one of the many ways the nation is remembering the civil rights leader just ahead of Martin Luther King, Jr Day on Monday.

In Boston, a massive bronze sculpture called “The Embrace” was unveiled honoring King and his wife, Coretta.

The artwork was inspired by a photo of the couple hugging after King received the Nobel Peace Prize in 1964.

The King Center in Atlanta, a nonprofit started by Coretta Scott King in 1968 to preserve her husband’s legacy, will be hosting a commemorative service Monday in remembrance of him.