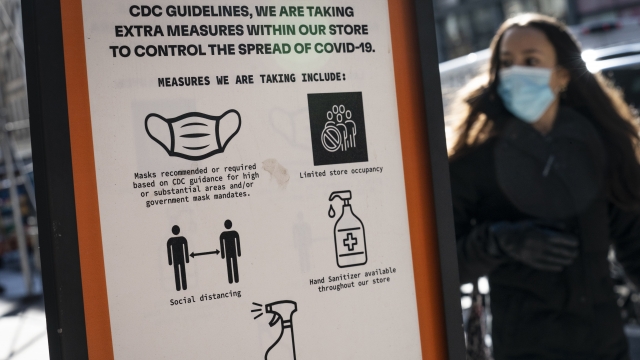 Officials in big cities around the U.S. push for a return to normalcy after two grueling years of the pandemic.

New York City and Los Angeles are lifting some of their strictest COVID-19 prevention measures as officials in big cities around the U.S. push for a return to normalcy after two grueling years of the pandemic.

New York City, which has long prided itself as having the nation's toughest COVID-19 safety protocols, will do away with several of its mandates next week, including required masking in public schools and vaccination requirements at restaurants, entertainment and cultural venues, the mayor announced Friday.

On the other side of the country, residents in Los Angeles County were no longer required as of Friday to wear masks at restaurants, bars, gyms, shops and other businesses, though the city of Los Angeles is still requiring many indoor businesses to verify that their patrons are fully vaccinated.

The moves to ease the mandates comes as government officials around the U.S. have been easing COVID-19 guidelines and signaling that the risk of virus spread is retreating — at least for now.

Illinois lifted face mask requirements for many indoor spaces on Monday, and Boston will lift similar rules on Saturday. Chicago stopped requiring proof of vaccination to dine in restaurants. The U.S. Centers for Disease Control and Prevention said last week that most Americans can now safely take a break from wearing masks, including students.

New York City Mayor Eric Adams, declaring it was time to "celebrate" as he stood in Times Square on Friday, said the city needed to recover and that "we are not going to allow COVID to define us."

"We're far from out of the woods. COVID is still here. But we are beating it back," Adams said.

He invited "people from Canada, from Arkansas, from New Zealand, from anywhere else," to visit and spend money and implored New Yorkers to "go out this weekend and go dine."

The Democratic mayor said he was confident that it would be safe, starting Monday, to send children and teachers to school unmasked and no longer require some businesses to check guests' vaccine cards.

The decision to ease rules in Los Angeles County aligns with new California guidelines unveiled allowing vaccinated or unvaccinated people to choose to go without face coverings in most places.

Masks are still required in all K-12 school districts until March 12. After that, districts may maintain their own mask requirements. Business owners also can choose to require masks for customers and employees.

At Coffee Fix in the Studio City neighborhood of Los Angeles, owner Tae Kim said the change in masking rules has been a bit confusing for customers.

One customer Taylor Lewis, who was wearing her mask, said it was "so nice seeing people's faces" but she would continue to wear her mask out of habit in indoor places.

"With the ever-changing facts that are given to us I see the good in wearing it," she said.

In New York City, the elimination of the school mask requirement is a striking turnaround from just a few months ago, when some parents and teachers were agitating for a return to remote learning as the omicron wave swept through schools and attendance plummeted. The teachers union said Friday it supports the move to lift the rule.

Children under age 5 would still have to wear masks because they are not eligible for the vaccine.

The city's vaccine mandate, imposed last year in a program called Key2NYC, required New Yorkers and tourists to show proof of vaccination to enter restaurants and bars, work out in gyms, catch a movie, attend a Broadway show, go to a convention or visit a museum.

Not all of those places are ready to drop the restrictions. The Broadway League has said it will maintain mask and vaccination requirements in all its theaters at least through April 30.

Andrew Rigie, the executive director of the New York City Hospitality Alliance representing restaurants, bars and nightclubs, said Friday that he thinks few venues will continue to impose vaccine rules on their own because their staff had to enforce the rules with customers and, at times, weather their frustrations.

"Regardless of what someone's opinion is of the vaccination requirement, it's put restaurant workers in an extraordinarily difficult position," he said. "We hoped that people would respect workers but it's been really tough."

The rules also barred star Brooklyn Nets guard Kyrie Irving from playing home games with the team. But Adams said that he plans to preserve a rule requiring private employers to ensure their workers are vaccinated, which would apply to Irving.

By lifting the Key2NYC rule, Irving would be allowed to attend the Nets' home games as a spectator but not play.

Recently, New York City has been averaging just under 680 new coronavirus cases and 25 deaths each day, down from nearly 41,000 new cases and nearly 130 deaths per day at the height of the omicron wave in January.

The virus continues to hospitalize and kill New Yorkers with greater frequency now than it did last summer and through much of the fall, when many of the vaccination and school masking rules were imposed.

Around 4,000 city residents have died of the virus since Jan. 1, more than in the previous nine months combined.

Not everyone agreed with the move.

The city's public advocate Jumaane Williams, who served as an elected ombudsman, called it "unnecessary and unwise" to remove the vaccine requirement while lifting other rules and people needed to feel safe.

Adams, responding to critics on Friday, said "there's no decision you can make in New York that you're going to get 100% of New Yorkers" to agree with.

He said some people may be reluctant to dine out without vaccine rules but said he thinks most New Yorkers are ready.

"We are all right, folks," Adams said. "We're doing the right things."