Pres. Biden's Effort To Reunite Border Families: 'We Owe It To Them' 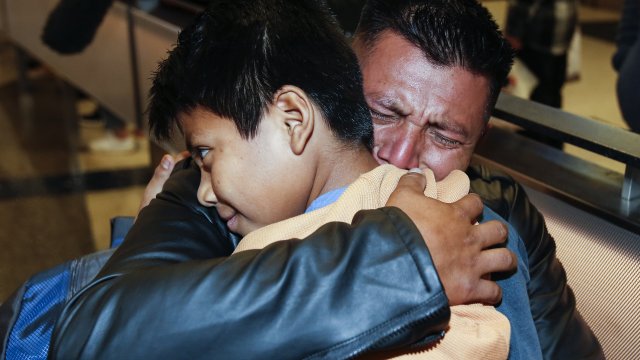 President Biden has devoted much of his time in office, so far, to reversing the legacy of Donald Trump.

And one of his most challenging items will be reuniting families separated at the border.

"We have been searching on the ground in Central America for the families without phone numbers, without addresses," said Lee Gelernt, deputy director of the ACLU immigrant rights project.

More than two years after the controversial Trump policy was banned, over 600 children remain separated from parents who can't be located.

President Biden will reportedly create a task force in the coming days to find the missing parents.

Advocates welcome any assistance. But they also call on the president to offer legal status to the thousands of families who suffered the trauma of separation.

Guatemalan immigrant Ernesto is one of them.

"I saw when children were taken from the necks of their fathers and mothers by force. It was very sad," Ernesto recalls.

In 2018, immigration officers entered his El Paso detention station and grabbed his 14-year-old son and other kids without any explanation.

Soon after, Ernesto was deported while his child remained in the U.S. He asked us not to use his last name.

"As a parent, I suffered. But it was even worse for the children," he said.

With help from Al Otro Lado lawyers, he was able to reenter the U.S. a year later and reunite with his son. He's now seeking asylum from political persecution.

"We owe it to these families. They've suffered a terrible, terrible harm that was inflicted only to cause harm," said Cathleen Caron, founder and executive director of Justice in Motion, a nonprofit that works with organizations in Mexico and Central America to find parents.

The Trump administration approved large-scale family separations — including for toddlers — in April 2018 as part of its "zero-tolerance" policy prosecuting all undocumented border crossings.

But after images of children locked in detention cages sparked outrage, Trump ended the policy about two months later.

A recent government report details how then-Attorney General Jeff Sessions and other officials knew the policy would split up families — and yet implemented it without a thorough plan to reunite them.

"Better coordination always works," admits Mike Howell, a former Homeland Security official who was in the Trump administration when the border policy was implemented.

Howell agrees that it needed better planning but says the parents who crossed the border illegally with their kids are also to blame.

"There's only one category of people that chose family separation in this country. It's the parents," Howell said.

As for family advocates, they would like the Biden administration and Congress to further investigate the origin of the policy so it never happens again.