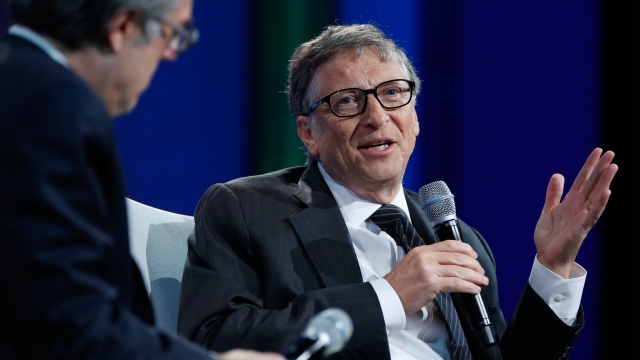 The goal is to bring technology that leaves less of a carbon footprint to the market faster.

"I am optimistic. I think we will get the increased investments. If we come together, really realize what solves the problem, then we will make the breakthroughs," Bill Gates said in a video posted on his blog in November 2015.

It appears Gates and 20 of his fellow investors are $1 billion closer to those "breakthroughs" in green technologies.

The goal of the fund is to develop "affordable and reliable" ways of living that will emit nearly no greenhouse gases.

And there's an urgent need. By 2040, global emissions of carbon dioxide — the most prevalent greenhouse gas — are expected to increase from 2012 levels by one-third.

The investments, as Gates described in the video last year, would be in "high-risk" green companies and would be long term. The fund has a lifespan of 20 years.

"... that formula will accelerate the innovation at the research level, accelerate the risk-taking, and that's what gives us a chance at having a solution," Gates said in the 2015 video.

SEE MORE: We Still Don't Know What Capturing CO2 From Power Plants Will Do

By speeding up innovation and risk-taking, the hope is new developments will be accessible to the public sooner.

Investments will likely be made in sectors like transportation, agriculture, industry, buildings and electricity.