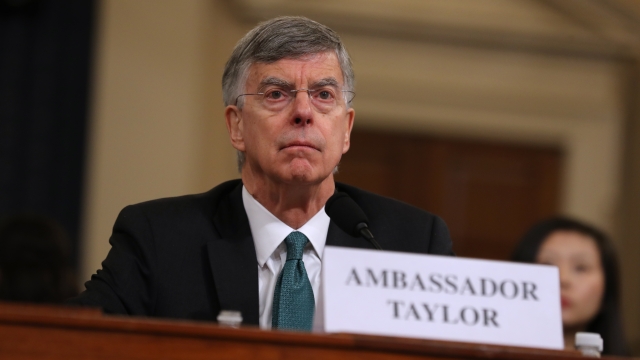 Kristina Kvien, the former deputy chief of mission, has taken over in the interim.

Bill Taylor, who led the U.S. Embassy in Ukraine, has officially left his post. On Wednesday, Kristina Kvien, the former deputy chief of mission, stepped in as its interim leader.

The embassy made the announcement Thursday.

In a video, Kvien said: "Our embassy team will continue to partner closely with the Ukrainian government and civil society in support of Ukraine's sovereignty and territorial integrity and in support of reforms that will help Ukraine build its prosperous European future."

In his goodbye message, Taylor said he knew he was "here for a limited period of time."

Taylor was also a key witness during the impeachment inquiry into President Donald Trump. He testified that he had repeatedly questioned the decision to withhold U.S. military aid from Ukraine unless the country investigated President Trump's political rival Joe Biden and his son.

Taylor, who had previously retired from the Foreign Service, took over as acting ambassador to Ukraine after Ambassador Marie Yovanovitch was fired last year. Yovanovitch told Congress she believes she was removed after a concerted effort led by President Trump's personal attorney Rudy Giuliani.

President Trump has not said who he'll nominate as ambassador to Ukraine.