Tom Steyer Drops Out Of Race For The White House 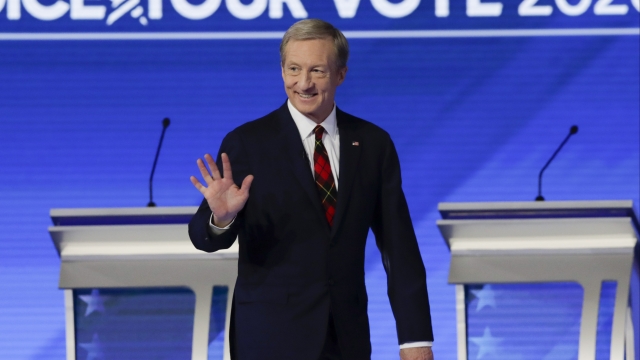 The billionaire-turned-politician jumped into a crowded Democratic field in July 2019 and made climate change a central focus of his campaign.

The last remaining non-politician is out of the race for the White House. Tom Steyer has announced he's suspending his campaign.

The billionaire-turned-candidate jumped into a crowded Democratic field in July 2019. Before that point, he was largely known as the guy calling for President Donald Trump's impeachment. He continued to talk about that as a candidate, but he made his campaign's central talking point climate change.

"We must treat the climate crisis with the urgency it demands," Steyer said in a campaign ad.

Steyer's national poll numbers never escaped the single digits, but he did qualify for a handful of Democratic debates.

Steyer was a big spender while his campaign was active, but he was largely spending his own money. Federal Election Commission data shows he contributed over $200 million to his own campaign.

Steyer made his money as the founder of an investment company. Before launching his political career, he spent years as a philanthropist and political activist. He's likely to return to that path and to continue using his personal wealth to support progressive causes.