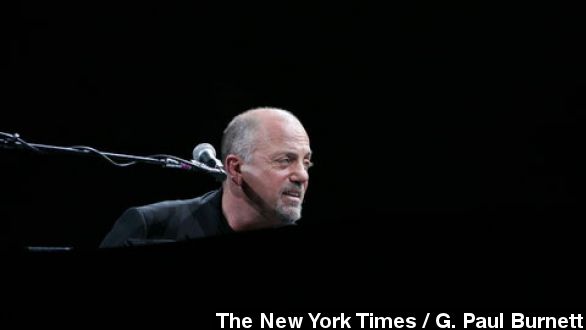 Billy Joel playing Madison Square Garden — not a big deal right? He's a New York guy. He's played the Garden 46 times. But it sounds like the 64-year-old "Piano Man" will soon be even more of a regular.

"MSG striking a major deal with the singer, whereby Joel will host one concert a month at MSG as long as there's demand for tickets." (Via CNBC)

We're accustomed to this kind of setup in Vegas, says one Rolling Stone writer who reminds us of all the major stars who have casino deals. "This is the first time, however, that a major artist has announced such an endeavor outside of Las Vegas."

The unprecedented monthly arrangement between MSG and Joel makes the singer just as much of a fixture as the New York sports teams that call Madison Square Garden home.

"The Garden says it will call the Piano Man one of its franchises, right up there with the Knicks and the Rangers." (Via WNBC)

What does that "franchise" tag mean for Billy Joel? An arts beat writer for The New York Times says: ​"For one thing, a logo was created for him — basically, his name and a light abstract representation of the Garden."

In a statement, Joel said, "I’ve played different venues all over the world, but there’s no place like coming home to The Garden. Since my first show in 1978, I’ve always looked forward to the energy of the crowd." (Via News 12 Connecticut)

According to Fox Business, the announcement comes at a time when the bottom line at the Garden could use some growth. As a publicly traded stock, Madison Square Garden's entertainment dollars are down.

CHARLES PAYNE: "I don't know if Billy Joel is the answer, but I think this particular venture is going to be successful."

"So, does Billy Joel move the stock?"

Entertainment Weekly notes four of Joel's previously announced shows at the Garden are sold out. They're scheduled for January, February, March and April. May's show will be held on Joel's 65th birthday.