Bipartisan Legislation Could Give Dreamers A Path To Citizenship 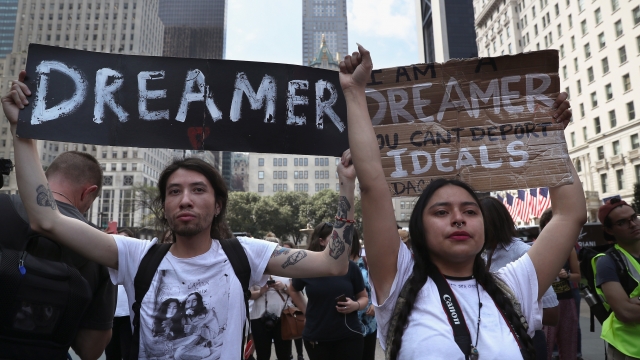 If the legislations passes, it would give Dreamers a path to permanent residency.

Sens. Lindsey Graham, a Republican, and Dick Durbin, a Democrat, are pushing for legislation that would give recipients of the Deferred Action for Childhood Arrivals, or DACA, program a path to citizenship.

It's called the DREAM Act and would give undocumented immigrants brought into the U.S. as children, commonly known as Dreamers, a way to gain permanent residency. They could do this by graduating high school or getting a GED and then attending college, joining the military or being employed. The Center for the Study of Immigrant Integration estimates 1.8 million immigrants would be eligible under the bill. Versions of the DREAM Act have been around since 2001, but have never gotten enough support to pass.

Sen. Durbin said on Twitter he will work to protect Dreamers adding, "Hundreds of thousands of talented young people who have grown up in our country are at risk of deportation to countries they barely remember."

House Democrats are working on their own legislation, the American Dream and Promise Act, that would give Dreamers, individuals with Temporary Protected Status, and Deferred Enforced Departure recipients a path to citizenship. An estimated 2.5 million immigrants could benefit from that bill.

It's unlikely either of these bills would pass and if they did, it's even more unlikely President Donald Trump would sign it. In the past, he's said he would back similar legislation if he was guaranteed funding for his proposed border wall.