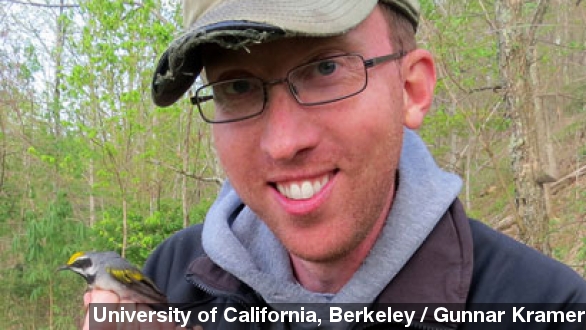 A new study suggests a certain type of bird was able to sense a tornado outbreak that moved through the U.S. a day before it hit.

It could save a lot of lives if we could predict vicious weather phenomena hours or even more than a day before they hit.

Our science isn't quite there yet, but nature is. (Video via MSNBC)

This is the golden-winged warbler: tiny, yellow and according to a new study, quite the meteorologist.

"There was a deadly tornado outbreak in April ... in several states including Missouri, Kansas, Oklahoma and Alabama," KSHB reports.

That storm produced more than 80 tornadoes, killing 35 people. It was more than 500 miles away when the birds decided to flee their Tennessee breeding ground. (Video via NBC)

A National Science Foundation postdoctoral research fellow told NBC: "Meteorologists were predicting that the storm might come our way. ... But by the time they were saying they were sure it was coming, the birds had already figured it out and were gone."

According to the study published in Current Biology, the birds likely heard the low-frequency rumble of the storm, not audible to humans.

But as one researcher explained, getting a sense of the birds' weather-predicting abilities wasn't the intended goal.

He told the BBC they "initially set out to see if tracking the warblers was even possible."

"This was just a pilot season for a larger study that we're about to start. ... The fact that they came back with the geolocators was supposed to be the great success of this season. Then this happened!"

However, researchers admit, even though the data is interesting, weather like cloudy skies could have affected the locator.

But tornadoes aren't the only natural disaster animals have early warning instincts for.

"The big tsunami that hit, I think it was in 2004, a lot of the natives said they saw the animals they noticed were going up the hills just before the tsunami," adds KSHB.

According to Firstscience TV: "The tsunami claimed almost 300,00 human lives. Yet in all the ... areas destroyed by the tsunami, not a single animal that was free to move lost its life."

Interesting. So maybe the next time you see an animal acting a little strange, it could be an ominous sign of what's ahead.

This video includes an image from University of California, Berkeley / Gunnar Kramer.