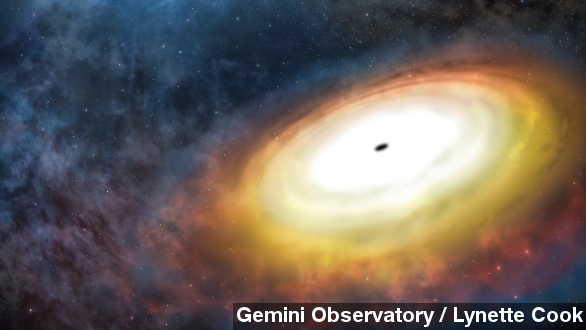 Black holes — they’re one of the universe’s greatest mysteries. And they just got a little more mysterious. (Via NASA)

Scientists discovered there's an incredibly bright black hole about two times as bright as scientists had thought possible. It's tucked away in a galaxy twenty-two million light years from our own.

See, there are two different types of black holes. The small ones have a mass about the size of the sun, and the big ones clock in about a billion times the sun’s mass. (Via YouTube / SpaceRip)

And there’s another distinction, small black holes give off high-energy X-rays, while the larger black holes tend to give off low-energy x-rays. Because this one is so bright, researchers assumed it was a massive black hole with low energy x-rays. (Via YouTube / Vsauce)

But for some reason, it gives only incredibly low energy X-rays but has the brightness of small black hole. Confused? So were the scientists that discovered it.

As one of the researchers told Space.com:  “As if black holes weren’t extreme enough, this is a really extreme one that is shining as brightly as it possibly can … It’s figured out a way to be more luminous than we thought possible."

They eventually figured out the black hole was in fact a small one but it has a companion star that orbits around it — also known as a Wolf-Rayet system. (Via YouTube / Sky Faction)

With that, they were able to estimate the black hole’s mass was between 20-30 times that of the sun. (Via YouTube / maverick)

As for what’s making it so bright, a writer at the Los Angeles Times explains one possibility: “ The astronomers think that the black hole has a companion star whose stellar wind – gusts of charged particles blowing out from the star’s body and onto the black hole’s accretion disk – could be powering the bright beacon.”

The researchers say the discovery should force them to rethink the way black holes radiate energy. Their findings are published in the journal Nature.