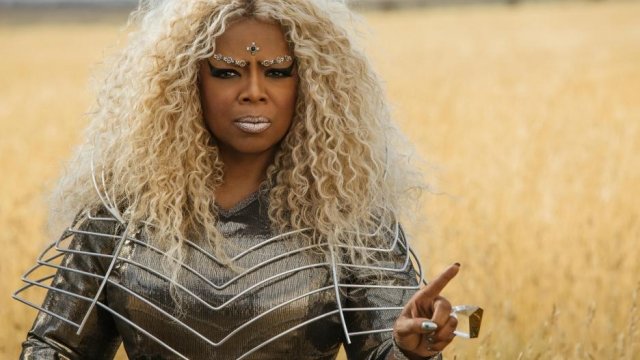 "Black Panther" has officially crossed the billion-dollar mark, while Ava DuVernay is the first black woman to direct a $100 million film.

Mindy Kaling, Reese Witherspoon, Ava DuVernay in the director's chair, a new song from Sade and Oprah is apparently still not enough — T'Challa takes the weekend yet again.

Racing into its fourth weekend at No. 1 is "Black Panther," bringing in an estimated $41 million and pushing its domestic total to $562 million. That tremendous staying power at the box office has put this film in very exclusive company.

"Black Panther" has now passed the "The Dark Knight" to become the second-highest-grossing superhero movie ever. "The Dark Knight" premiered in 2008 and by the end of its run was one of the most critically acclaimed and profitable films in the hero genre. What can I say? We moviegoers love a good villain.

It's also the highest-grossing hero origin story by more than $100 million — the next closest is "Wonder Woman" with $412 million.

But the biggest milestone of the weekend is undoubtedly "Black Panther" crossing the billion-dollar mark at the worldwide box office.

Out of the long list of Marvel films, "Black Panther" is the fifth MCU movie to pass the billion-dollar mark and the only origin story to do so.

Taking the No. 2 spot this week is "A Wrinkle in Time," bringing in an underwhelming but acceptable $33 million in its debut. That's less than Disney was hoping for, but the studio is expecting to get a small bump from kids across the country being off for spring break.

What's important to remember about this film is it cost $100 million to produce, which means it's got to bring in at least that much to break even. And unfortunately, critics are not helping with this effort.

"It just does not work," Christy Lemire said on What the Flick?! "It's colorful, but it feels simultaneously overly simplistic, like for little young viewers in its color and its energy, but the narrative has been so compressed that the emotion that it seeks from us never really materializes."

Despite the mixed-to-negative reviews and the subpar box-office performance, "A Wrinkle in Time" does stumble into some history making.

DuVernay is the first black woman to direct a $100 million movie. And with Ryan Coogler's "Black Panther" still dominating theaters, this is the first time two black directors with $100 million films have held the No. 1 and No. 2 spots at the box office simultaneously.

Taking the No. 3 spot in its debut weekend is "Strangers: Prey at Night," bringing in an estimated $10 million.

As for next week, Lara Croft brings badass back to your local theater.