'This Is Not What We Wanted': Black Protesters Stop Outside Agitators 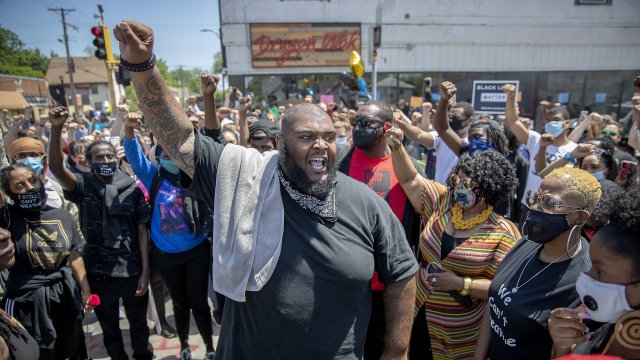 New York officials and others around the country think outside agitators are hijacking George Floyd protests.

"Stop. Stop. This is not what we wanted. Stop," yells protester and Denver School Board Director Tay Anderson during the George Floyd protests. The White vandal is later reprimanded.

In another video, a Black protester catches White vandals defacing a Starbucks building. "This is not a Black woman putting a Black Lives Matter. …  Y'all are doing that for us, but we didn't ask you to do that. Don't spray stuff on here when they're going to blame Black people for this and Black people didn't do it. "

Locals are cleaning up their communities as protests over the death of George Floyd continue.

In Washington, D.C., one White rioter is destroying city property until protesters delivered him to the police. In New York City, of the nearly 800 people arrested, one in seven are not from New York City. New York officials and others around the country think outside agitators are hijacking the protests. And in Chicago, images of looting threatened to drown out the voices calling for change.

Kim Foxx, State’s Attorney, Cook County, Illinois: "Ladies and gentlemen, it's awful. This is our home. And these people who have come in to disrupt that who care not about systemic issues but shoes for profit."

Foxx says we shouldn’t use the terms "protesters" and "looters" interchangeably.

Foxx: "We conflate protesters and looters. Those are two different groups. Let us not conflate what is happening in streets across the country."

The George Floyd and Black Lives Matter protest is about justice for George Floyd and an end to police brutality. Denver community activist Tay Anderson and others fear that message is lost in the wave of destruction, looting and property damage.

Celebrities Use Their Voices To Speak Out Against Racial Injustice

Some are calling for action on social media while others are donating bail money for protesters who've been arrested.

Anderson: "Some people are coming out with their own motives. And they're using the pain of our community to be able to use that as an excuse to destroy their cities. Now in other cities, there are people of color that are rightfully angry, that are taking to the streets in their own way."

Anderson tells Newsy that he doesn't speak on behalf of the Black Lives Matter movement, but as a Black community organizer he says he doesn't judge other people of color who are angry and destroying property.

Anderson: "I don't critique people of color when they are because we are an oppressed people. And I understand other organizers and other brothers and sisters in the fight. But it is not the space for White folks to come in on our behalf and to destroy property in our name if we didn't ask for them to do so."