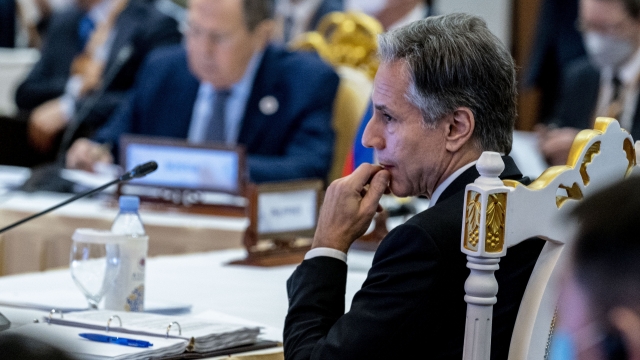 U.S. Secretary of State Antony Blinken said Friday that China's military exercises aimed at Taiwan, including missiles fired into Japan's exclusive economic zone, represent a "significant escalation" and that he has urged Beijing to back down.

The measures are the latest in a series of steps intended to punish the U.S. for allowing the visit to the island it claims as its own territory.

China launched the drills following a visit by U.S. House Speaker Nancy Pelosi to Taiwan that infuriated Beijing, which claims the self-governed island as its own territory.

Blinken told reporters on the sidelines of a meeting with the Association of Southeast Asian Nations in Cambodia, however, that Pelosi's visit was peaceful and did not represent a change in American policy toward Taiwan, accusing China of using it as a "pretext to increase provocative military activity in and around the Taiwan Strait."

He said the situation had led to a "vigorous communication" during East Asia Summit meetings in Phnom Penh in which both he and Chinese Foreign Minister Wang Yi took part along with the ASEAN nations, Russia and others.

"I reiterated the points that we made publicly as well as directly to Chinese counterparts in recent days, again, about the fact that they should not use the visit as a pretext for war, escalation, for provocative actions, that there is no possible justification for what they've done and urge them to cease these actions," he said.

Blinken did not sit down one-on-one with Wang but said he had spoken with the Chinese foreign minister already about the possibility of a Pelosi visit to Taiwan before it had taken place during meetings in Bali, and had made the U.S. position clear.

China on Friday announced sanctions on Pelosi for her visit. A Chinese Foreign Ministry statement said she had disregarded China’s concerns and resolute opposition to her trip.

U.S. Speaker Pelosi Arrives In Taiwan Despite Warnings From China

House Speaker Nancy Pelosi has landed in Taiwan despite threats from Chinese officials of "resolute and strong measures" in response.

Pelosi received a euphoric welcome as the first U.S. House speaker, and highest-ranking U.S. official, to visit Taiwan in more than 25 years.

China opposes any engagement by Taiwanese officials with foreign governments, and has accused the U.S. of breaking the status quo with the Pelosi visit. The U.S. insists there has been no change to its "one-China" position of recognizing the government in Beijing, while allowing for informal relations and defense ties with Taipei.

Despite the aggressive Chinese reaction to the visit, Blinken said the U.S. would also not change its "commitment to the security of our allies in the region," and that the Defense Department had ordered the U.S.S. Ronald Reagan aircraft carrier group "to remain on station in the general area to monitor the situation."