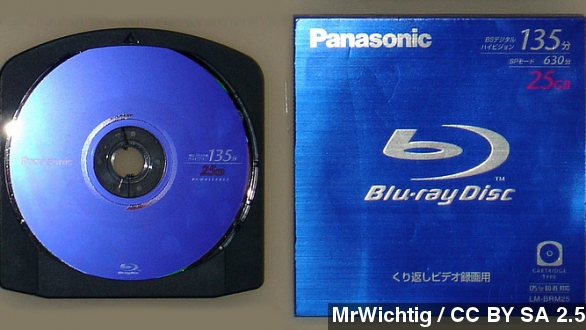 Researchers at Northwestern University are repurposing Blu-ray movies for better solar panel technology thanks to the discs' internal structures.

Ah, the plight of the Blu-ray disc.

Though Blu-ray was touted as superior to DVD, its introduction to the market came at a bad time, when cloud technology and high-speed Internet were blossoming. (Video via TDK)

But it looks like Blu-ray discs could have a second life ... one that happens to be green.

It started with researchers at Northwestern University cutting the edges off a Blu-ray disc. They were hoping to get at the internal structure of encoded data. (Video via International Data Group)

It turns out the encoded binary data on the disc formed patterns that are a couple hundred nanometers, making them "near-optimal" sizes for trapping photons. (YouTube / MinutePhysics)

These same photons are the type that renewable energy afficionados hold in such high regard. That's right, we're talking about solar panel technology.

Because of all the "islands and pits" — basically physical imprints of data on the disc — Blu-ray internal structures absorbed over 20 percent more photons than a regular solar panel design, according to the study.

The more photons absorbed, the merrier.

Blu-ray configurations made solar panels about 12 percent more efficient, which means researchers could consider them for molds for future solar panel construction.

So what movies make the best solar panels? Turns out it doesn't matter. Discs just have to have something written on them, compressed and error-controlled in the Blu-ray format.

This video includes an image from MrWichtig / CC BY SA 2.5.