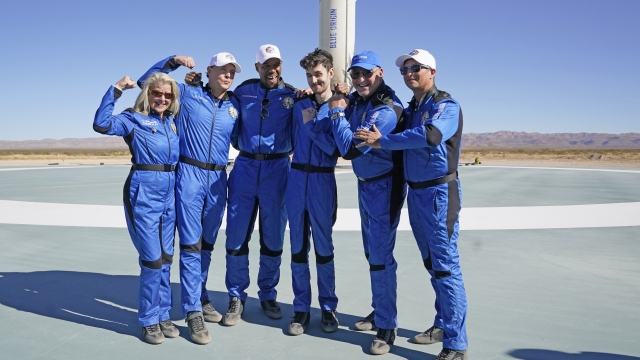 Laura Shepard Churchley — the daughter of Alan Shepard, who was the first American in space — was among the company's first six-person crew.

Their 11-minute flight was the third successful launch for Blue Origin and further proof of Blue Origin's concept: a fully autonomous, reusable joyride to space.

"It was a lot more calm in there than it was trying to beat the Patriots in the Super Bowl," Strahan said.

It's a little tight getting in but once inside the New Shepard capsule, the astronauts have a little more room. On a screen in front of the astronauts, they get data about the launch, their altitude and other information. Next to their seat is something that houses a capsule that actually separates this crew area from the booster should there be a problem — it keeps them safe during launch. There are hand-holds in some places so they can do some spinning around once they get into zero gravity. With six people, one in each of these chairs, they actually have to synchronize what they're going to do up there so they don't get any feet in the face. But maybe the most striking piece of all of this is the giant window, the biggest ever in space, and the view you get out of it.

"If you think of a small child or a puppy or something that's beautiful, yet vulnerable — that you know if you walk away they're not going to make it by themselves — that's the feeling you get looking at the Earth from up there," Dylan said. "It's so fragile and the atmosphere is so thin."