The Board Game Industry Is Booming 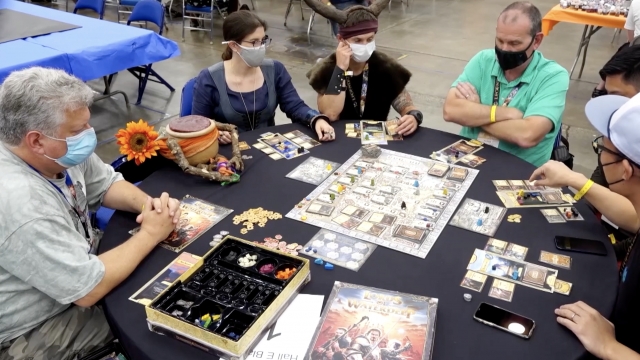 From new titles to collectable finds, the board game industry has skyrocketed in popularity over the past couple years.

Gen Con is the country’s largest annual gathering of fans and developers of tabletop games.

From family classics like Settlers of Catan to new games from indie companies, the convention held in Indianapolis showcases some of the biggest players in the $3 billion board game industry as well as their most dedicated fans.

Peter Fenlon knows his way around the long roads of board games.

“We brought the idea of modern board gaming to America," Fenlon said. "It's been sort of the beginning of a renaissance.”

He’s the CEO of Catan Studios — the company behind Settlers of Catan, which has sold more than 40 million copies worldwide.

“Gaming has been growing since the 70s, but it’s exploded in the last 10 years," Fenlon said. "You're seeing a lot of people looking for a richer sort of storytelling experience, where they can immerse themselves in a story with some friends and just casually have some fun.”

Board games in the U.S. have been around since before Catan’s debut in 1995, with Monopoly debuting in 1935 and Scrabble in 1938. But the industry has skyrocketed over the past couple years thanks to nostalgia, growing online communities and the emergence of indie developers.

Today, classic board games are now major collectibles on online marketplaces like eBay, and new titles from emerging companies are fundraised through grassroots campaigns on platforms like Kickstarter.

Tabletop games make up around one third of Kickstarter’s total annual revenue, and last year, more than 100 games more than half a million dollars each on the platform.

Chris Solis, the creator of games like “Pocket Paragons,” is one of the many indie developers on the platform.

“Kickstarter basically allowed me to start this company, to put the idea out," Solis said.

Beyond the growing gamer communities and marketplaces online, new players are drawn to board games because of how they connect people in real life.

“It gives you a lot of human connection," Solis said.

The board games market grew by 20% during the beginning of the pandemic because it was a form of entertainment that didn’t involve staring at a screen.

“What a tabletop game continues to do and did during the pandemic as well is that it creates this opportunity where we can sit at the table together, we connect in a very different way," said Deirdre Cross, general manager of Funko Games.

“I think the board game industry is very resilient," Cross said.

"The business is exploding," said Bob Means, director of trading cards at eBay. "Tabletop trading card — it's just getting bigger every single day."