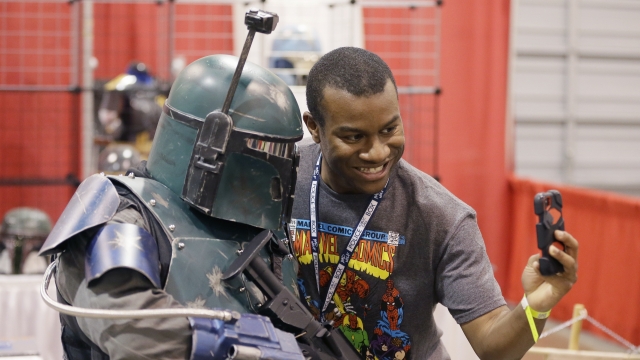 Boba Fett is headlining his own Disney Plus series, four decades after fans thought he was done for. But no one in "Star Wars" is ever really gone, least of all, the galaxy's coolest bad guy.

Fett has come a long way since his cartoon debut in the 1978 "Star Wars Holiday Special." He had only four lines in the original trilogy, but still found his way into fans' hearts. Maybe it was the way he could outsmart Han Solo or how only he dared to back-talk Darth Vader.

Vanity Fair Senior Hollywood Correspondent Anthony Breznican said Fett was, "a little bit scary. The fact that you never saw his face, the fact that he was very quiet, he was always a little bit of Clint Eastwood's ‘Man with No Name."

For years, fans wanted more. Gustavo Perez, contributor to the Boba Fett Fan Club, said "having his appearance cut short, and in a way that wasn't perhaps faithful to the character that he had become in fans’ minds, I think that's what created a yearning to see him return sooner or later."

Finally, in 2020, we found out Fett was alive and kicking all kinds of Stormtrooper but in an episode of “The Mandalorian," played by actor Temura Morrison.

"My excitement and my hype was through the roof. I have basically waited for those moments my entire life," Perez said.

Matt Jordan dresses up as Darth Vader with the 501st legion, a "Star Wars" costuming group. But now, he’s putting together everything he needs for the new version of Boba Fett’s costume. It can be expensive, but Jordan says the reaction at events like these make it all worth it.

"You put the helmet on, and you become the character and you get into it...when a kid or an adult sees you and about loses their mind, it’s moving," Jordan said.

In the new series, Fett has graduated to crime lord.

Breznican said Fett "gets to be a mobster. He gets to be a boss, he gets to be a gangster, and we get to watch him live up to that mystery, that fearsome reputation that we imagined so many years ago."

“The Book of Boba Fett” and unlocks a brand new chapter and a second chance for a fan-favorite. It premieres December 29 on Disney+.