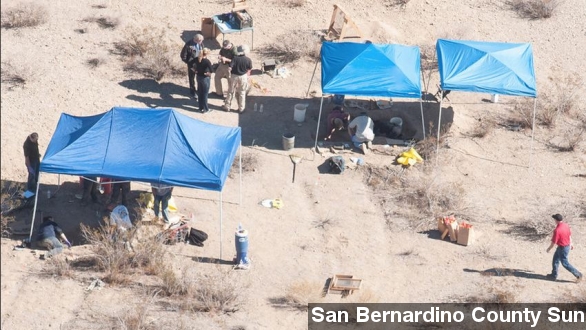 California sheriffs say they've found four bodies they believe to be the McStay family. The McStays disappeared more than three years ago.

California sheriffs say they've found four bodies they believe to be the McStay family. The McStays disappeared more than three years ago.

Since 2010, the search for the missing McStay family of California has drawn international attention and puzzled investigators. Police now say they might have found all four of the family's bodies.

"We're going to find this individual, or individuals. I know that the sheriffs, the FBI, everybody wants to bring this to justice." (Via KNSD)

That’s Michael McStay, the brother of Joseph McStay — who, with his wife and their two sons, went missing in 2010 when they were living in San Diego County.

For more than three years, investigators have speculated that the family packed up its belongings and left the country. The family's SUV was found two blocks from the border four days after they went missing. (Via KCAL)Some even thought they saw the McStays in a surveillance video taken at the Mexico-U.S. border. Several investigators scoured the globe thinking the moderately wealthy family had voluntarily disappeared. (Via Fox News)

Authorities have arrested a business partner of Joseph McStay, who may have murdered McStay, his wife and two young children.

All that speculation came to a screeching halt early this week when a motorcyclist discovered four bodies in shallow graves in the desert. (Via KGTV)

Although it's unclear just how long the bodies had been buried there, police were able to use dental records to identify the bodies of Joseph and his wife, Summer. (Via Los Angeles Times)

Police believe the two other bodies are their sons, who were just 3 and 4 years old when the McStays disappeared. They say they will have to use DNA testing to confirm their identities. (Via KNBC)

But the case is largely still a mystery. San Bernardino County Sheriff John McMahon wouldn't give any details about how the family might have died. Authorities say they are now treating the family's deaths as a homicide investigation.