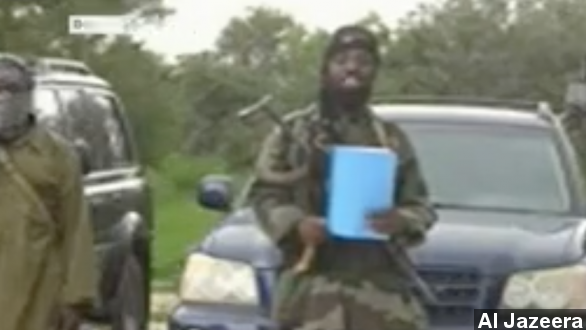 Like ISIS in Iraq, Nigerian terrorist group Boko Haram has declared its own caliphate to be governed by Sharia law.

Islamic terrorists have just declared a Muslim caliphate. And no, we’re not talking about ISIS.

Boko Haram — the terrorist group behind the mass kidnapping of over 200 Nigerian schoolgirls — also apparently wants to restore the Muslim empire. (Video via TVC)

Just last month, ISIS renamed itself the Islamic State after declaring a caliphate stretching from Iraq’s Diyala province to Aleppo in Syria. Boko Haram appears to have taken notice. (Video via ISIS) ​

According to Al Jazeera, in a new 52-minute-long video, the group's leader Abubakar Shekau announced plans for a caliphate in Gwoza —a Nigerian town the group seized of earlier this month. (Video via Al Jazeera)

Journalist Rawya Rageh describes the video as an “attempt to capitalize on IS explosive notoriety in Iraq.”

ISIS and Boko Haram, both Sunni Muslim, share the same goal of carving out an Islamic state. Boko Haram's leader, Shekau, has in the past even praised ISIS for its caliphate. (Video via Sky News, France 24)

His group has terrorized Nigeria for five years now — claiming responsibility for a wave of kidnappings, bombings and murders. Human Rights Watch says Boko Haram has killed over 2,000 people since the start of 2014. (Video via CBS, Channel 4)

Restoring the caliphate is the ultimate goal for these jihadi fighters. The Muslim world hasn’t seen one since since the collapse of the Ottoman Empire 90 years ago. Historically, there can only be one caliphate. It's unclear if Boko Haram intends for its so-called caliphate to co-exist with ISIS or to challenge it.

USA Today’s Philip Jenkins predicted rival caliphate claims back in July. “Their problem is that by bringing the caliphate back into play, ISIS will certainly inspire others to make similar claims … If there is not one universally agreed caliph … there are bound to be rivals.”

​No word yet from ISIS, Al-Qaeda or any of its affiliates.