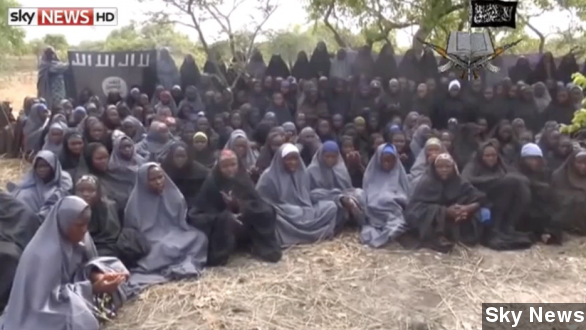 A video released from islamist militant group Boko Haram claims to show about 130 of the schools kidnapped in Nigeria last month.

A new video released by Islamist militant group Boko Haram claims to show some of the nearly 300 school girls kidnapped by the group in Nigeria last month.

Media outlets report the 17-minute video shows about 130 girls at an undisclosed location. Speaking in the video, the group's leader alleges the girls had converted to Islam and will not be released until all imprisoned Boko Haram fighters are freed. (Via Sky News)

According to the BBC, Abubakar Shekau said: "These girls, these girls you occupy yourselves with... we have indeed liberated them. These girls have become Muslims."

Officials say Boko Haram militants abducted a total of 276 girls from a boarding school in Northeastern Nigeria on April 14. Boko Haram may have split the girls into smaller groups to avoid detection from the international search effort. (Via NBC)

While some of the girls have managed to escape or elude their captors, The Telegraph reports: "Some 223 are still missing."

A BBC correspondent says the video may be a positive development for the rescue effort as it could be first step towards a potential negotiation.

JOHN SIMPSON, BBC: "They are not refusing, they are not threatening the girls... They're just saying they won't be released. If you remember just a few days ago, they were talking about selling them into slavery. So, this is very different."

CNN interviewed one of the girls who managed to escape. Asking not to be identified, the girl was afraid to describe her abductors.

GIRL: "We are a little afraid."

NIMA ELBAGIR, CNN CORRESPONDENT: "You feel afraid? You don't want to talk about what they look like."

The U.S., Britain and France all deployed special task forces on Friday to help local authorities search for the missing girls. The U.S. says there are still no plans to send combat troops into Nigeria at this time.