Trump And Bolsonaro Are Trying To Reboot US-Brazil Relations 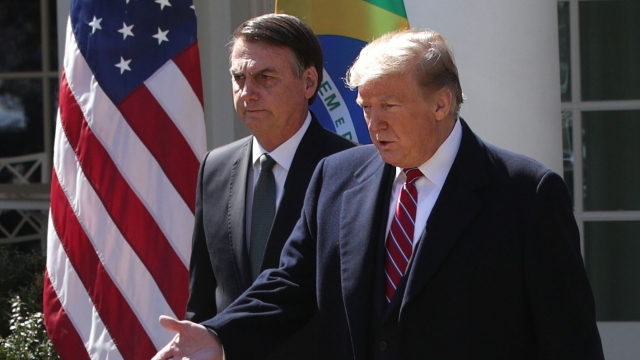 President Trump and Brazilian President Jair Bolsonaro are touting their cooperation as a new era of U.S.-Brazil relations.

President Trump is sending a clear message during his first in-person meeting with Brazilian President Jair Bolsonaro: things are changing for the better between the U.S. and Brazil.

President Trump told reporters: "The relationship that we have right now with Brazil has never been better. I think there was a lot of hostility with other presidents; there's zero hostility with me."

That's likely a reference to former President Obama, whose relationship with former Brazilian President Dilma Rousseff hit a rough patch after intelligence leaks revealed an extensive U.S. spying program in Brazil. The disclosure lead to two years of icy relations before both leaders were able to patch things up.

Rousseff was part of the left-wing Workers' Party, which ran Brazil for over a decade before Bolsonaro's election. The government found common cause with the U.S. on some issues, but also forged alliances with U.S. adversaries like Cuba and Iran.

Bolsonaro, a far-right hardliner, has made a sharp break from the previous government by adopting a more U.S.-centric foreign policy. His administration has been a key supporter of the U.S.-backed opposition in Venezuela.

The real test of the budding relationship between President Trump and Bolsonaro could come from China. Both leaders have said they want to curb China's influence in Latin America — but Bolsonaro might not have a lot of leverage against his country's number one trading partner.