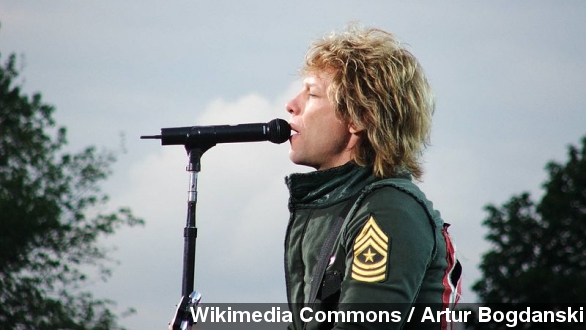 Anonymous sources tell CBS the rock star has been building ties with NFL bigwigs, hoping to buy a franchise.

CBS reports longtime rock 'n' roller Jon Bon Jovi is "consumed" with purchasing an NFL team, and he's got his eyes specifically on the Buffalo Bills.

JASON LA CANFORA: "I'm told he added legs to his tour to spend more time in Buffalo; he's been around hobnobbing, meeting various power brokers in that area. Some say he even fired Richie Sambora, his longtime guitarist, to save costs to be more liquid to go buy an NFL team. I'm serious."

It's unclear if Bon Jovi has the capital necessary to buy a pro football team, but apparently it's a longtime dream. CBS has this report from anonymous sources, who say the rock star has ties with NFL bigwigs. (Via Island Def Jam Music Group​ / "It's My Life")

The Bills are not having a great season, currently rounding out the bottom of the AFC East. At 95, the team's owner, Ralph Wilson, is the oldest owner in the NFL. When he passes, the team will go on the market. (Via WLNY)

And reports say the next owner will likely be Rogers Communications, based in Toronto. The Bills have actually played games in Toronto before, and if the company buys the franchise, it could soon be calling Canada home.

But not if Bon Jovi has anything to say about it — though he hasn't actually said anything yet. Not publicly, at least. (Via Bleacher Report)

Bon Jovi was the founder and primary owner of an Arena Football team, the Philadelphia Soul. He was also once rumored to be considering a partial buy of the Atlanta Falcons.

Correction: A previous version of this video referred to the team's possible future owner as Wilson Communications Group instead of Rogers Communications. This video has been updated.