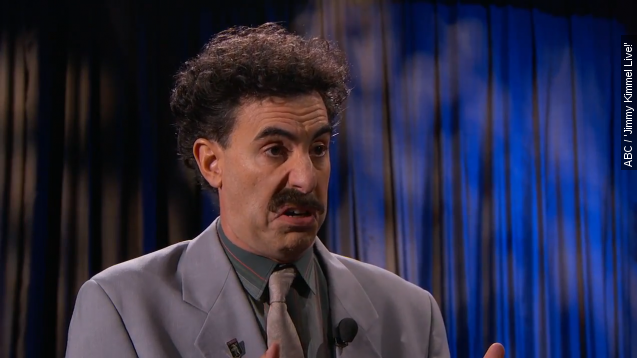 Sacha Baron Cohen brought back Borat to promote his next movie, "The Brothers Grimsby." And he even had time to blast Donald Trump while he was there.

Sacha Baron Cohen brought his most famous character back to life for an appearance on "Jimmy Kimmel Live!" And he's just as crude as ever.

Yup, Borat is still the same guy as he was before. And it turns out, he hates Cohen's other characters, including Ali G., Bruno and ... Donald Trump?

"It is clearly a parody of a rich, American racist," said Borat.

It took some convincing to actually get him to believe the Republican presidential candidate was a real person.

"If he is real, then Donald Trump is an absolute Kimmel," Borat said.

Cohen stopped by the show to promote his newest project, "The Brothers Grimsby," a flick about two long-lost brothers who meet up only to discover one is a spy and the other is just basically Sacha Baron Cohen.

"You can't hurt us, we have bulletproof glass! Boom!" Cohen said in "The Brothers Grimsby" trailer.

The film hits theaters in March 2016.