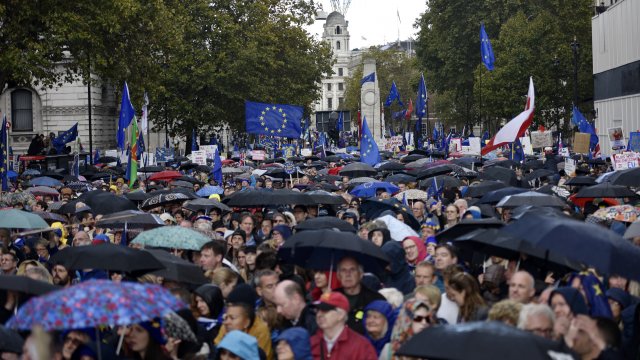 Johnson sent an unsigned request, a copy of the law that required him to send the request and a letter stating he doesn't really want an extension.

A recently-passed British law required Johnson to request a three-month extension by the end of the day on Saturday if parliament hadn't approved a Brexit deal.

Johnson's new Brexit deal was expected to see a parliament vote on Saturday. Instead, parliament members narrowly voted in favor of an amendment to withhold the House of Commons' approval until legislation necessary to implement it has passed. The lawmaker who proposed the amendment calls it an "insurance policy" to ensure that Britain doesn't "crash out" of the EU without a deal.

That new amendment meant the deal didn't get approval by the deadline, so Johnson had to request the extension. Right before his deadline, Johnson did send the request but didn't sign it, along with a copy of the text of the law that requires him to send the request. He then sent a separate signed letter stating that he does not want an extension, saying a longer delay would "damage the interests of the U.K. and our EU partners, and the relationship between us."

Despite the second letter, the EU is leaning toward approving the extension. The EU's president said on Sunday that "it makes sense to allow extra time."