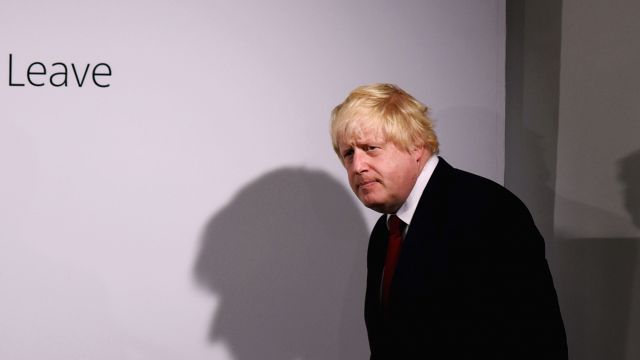 Johnson is an unusual choice to be the U.K.'s top diplomat. His hiring has prompted several retrospectives of all of the undiplomatic moments throughout his career.

For starters, Johnson has insulted the last two U.S. presidents, calling George W. Bush "a cross-eyed Texan warmonger" and blasting Barack Obama as "part-Kenyan" with an "ancestral dislike" of the U.K.

The current presidential candidates didn't get off any easier — Johnson described Hillary Clinton in 2007 as "a sadistic nurse in a mental hospital" and said he avoided traveling to New York because of "the real risk of meeting Donald Trump."

SEE MORE: Clinton And Trump Are Using The UK's Brexit Mess To Their Advantage

That's all positively tame compared to the prize-winning poem Johnson penned about the love life of Turkish Prime Minister Recep Tayyip Erdoğan. It features a goat, and that's all we're going to say about that.

Johnson also has an unfortunate knack for tumbling into embarrassing situations. He's gotten stuck on a zipline, been floored during an intense tug-of-war session, flattened a Japanese schoolboy during a game of rugby and charged into a retired German soccer player.

Johnson's new boss also doesn't seem to think to highly of his diplomatic abilities — she said, "Last time he did a deal with the Germans, I seem to remember he came back with three nearly new water cannons."

Which might be why she's outsourced one of the country's major foreign policy challenges — leaving the European Union — to a separate minister. Johnson's previously likened the EU's mission to Napoleon and Hitler.