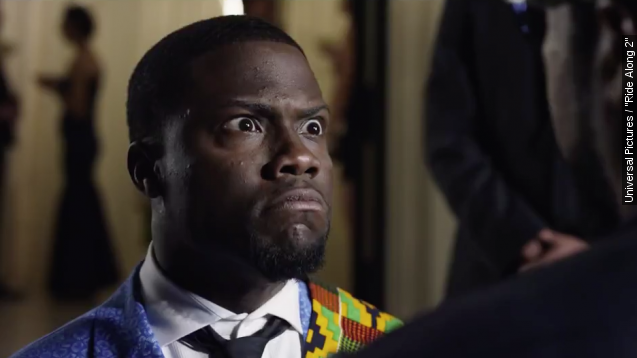 Kevin Hart, the busiest man in show business, isn't cranking out Oscar bait, but he's a solid bet if you want to make money with an original comedy.

After all the fanfare and a month at the top of the box office, did you have any idea this guy would take down "Star Wars"? Yeah, me neither.

Taking the No. 1 spot this week is Kevin Hart's "Ride Along 2," bringing in an estimated $34 million and finally dethroning "Star Wars: The Force Awakens," which led the box office for a solid month.

In the movie biz, sometimes it's not about the critical reception; sometimes you just pick a formula that works and you milk it for another movie.

Enter "Ride Along 2" and Kevin Hart. Hart, the busiest man in show business, is not cranking out highbrow Oscar bait, but he's a solid bet if you want to make money with an original comedy.

Consider this: Since 2012, major motion pictures starring Kevin Hart have made upwards of $560 million and only cost the studios involved around $136 million. That's a quadruple return on investment from the big little man. (Video via Hartbeat Productions)

All that being said, "Ride Along 2" sits at right about 14 percent on Rotten Tomatoes — so maybe Redbox it.

Fresh off its 12 Oscar nominations, "The Revenant" holds on to its No. 2 spot at the box office, bringing in an estimated $29 million.

Oscar darlings like "The Revenant" are not supposed to do well in theaters, but this R-rated, action-drama period piece is riding its Oscar buzz all the way to the bank. Regency Films took a huge gamble on "The Revenant" when its budget jumped from $90 million to $135 million, but it all seems to be paying off.

After this weekend's haul, "The Revenant" has brought in $151 million total, and it's only been in theaters nationwide for two weeks.

It took a while, but "Star Wars: Episode VII" has finally calmed down a bit, bringing in an estimated $25 million. So, for the first time since its December release, it is not at the top of the box office.

But of course with another weekend comes another record for Rey, Kylo Ren and BB-8.  This time, $1 billion from the international box office. "The Force Awakens" is one of five movies ever to hit that mark.

As for next week, De Niro's a long way from "Raging Bull."