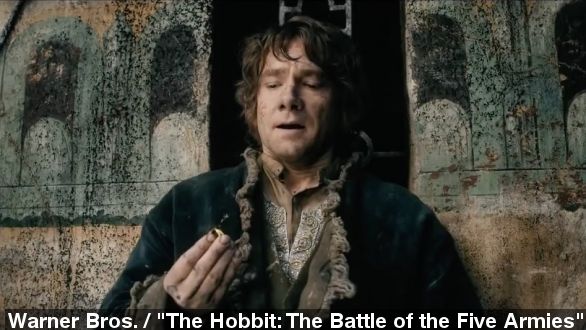 The story of Bilbo Baggins finally comes to a close with "The Hobbit: The Battle of the Five Armies" taking first place at the box office.

Warner Bros. / "The Hobbit: The Battle of the Five Armies"

'Twas the weekend before Christmas and the theaters were teemin’ to see two children’s movies and a much shorter, hairier Martin Freeman.

The story of Bilbo Baggins finally comes to a close this weekend with "The Hobbit: The Battle of the Five Armies" taking first place at the box office and bringing in an estimated $56 million.

Peter Jackson has now completed two Lord of the Rings trilogies in just over a decade — the original and this latest Hobbit trio. But just because you have the power to do something – like make a spin-off and then stretch that spin-off into a trilogy – doesn't always mean you should. (Video via ScreenSlam)

As one New York Times critic writes, "A certain kind of sequel or prequel, or just the weight of way too many lousy sequels or prequels or reboots, really can reshape your relationship to a story you once loved."

Rolling Stone takes this criticism a step further, writing, "The Hobbit: The Battle of the Five Armies is 20 percent inspiration, 80 percent desperation. ... The Hobbit movies are so bloated they could survive at sea without flotation devices."

Wanna know what else is bloated? Wallets, Hollywood wallets. Purist film critic ideals aside, "The Hobbit" trilogy has been a roaring success – financially, at least.

According to Forbes, Warner Bros. and New Line Cinema have spent about $765 million to produce the latest three films, but the worldwide domestic gross so far comes out to $2.1 billion. So the almighty dollar wins again.

Next up: from one trilogy to another, very different one, Ben Stiller continues his stint as the night guard at a magical museum of natural history in "Night at the Museum: Secret of the Tomb," bringing in an estimated $17 million.

And while most critics found "Night at the Museum" to be a just-for-kids flick, everyone seemed touched by the late great Robin Williams' last moment on screen.

NBC's Sheinelle Jones said on the Today Show: "There's a scene at the end of the movie where he does a salute on horseback. ... He was larger than life on that screen."

And the film's director Shawn Levy told The Wall Street Journal: "One scene that never changed once was the farewell between Robin and Ben Stiller. That scene now, of course, achieves crazy new depths of poignance."

And lastly, it's a hard knock life. 2014's Annie with "Beasts of the Southern Wild" star Quvenzhané Wallis playing the famous orphan brought in an estimated $16 million on opening weekend.

Because reviews of the film have been mostly (pause) completely negative ...

YouTube / Chris Stuckmann: "I'm not exaggerating when I say every time someone started to sing in this movie I became embarrassed to be there."

YouTube / schmoesknow: "The movie stoinks! It is awful! Hated it!"

I'm just going to focus on the positives which include and are limited to Quvenzhané Wallis.

Wallis is the youngest actress to receive an Academy Award nomination for Best Actress – making her a no-brainer to star in the Annie remake. And she's already bagged a Golden Globe nomination for her role in the film.

As for next week, Angeline Jolie gets in the director's chair for "Unbroken."