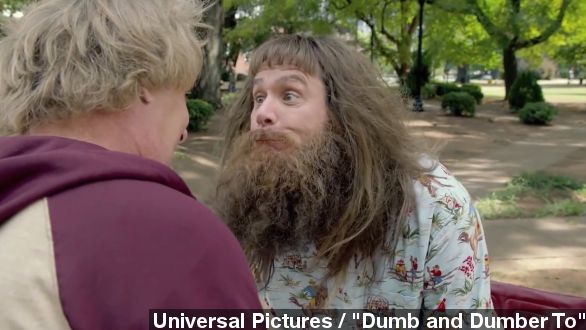 Taking the number one spot at the box office this weekend, "Dumb and Dumber To" reunites legendary funny men Jim Carrey and Jeff Daniels.

Universal Pictures / "Dumb and Dumber To"

This one goes out to everyone who believes in fresh breath, being on time and long peaceful drives.

"Wanna hear the most annoying sound in the world? AAAAAA!" (Video via New Line Cinema / "Dumb and Dumber")

"You're hot for my daughter!"

Taking the number one spot at the box office this weekend is "Dumb and Dumber To," which brought in an estimated $38 million. The sequel to the 20-year-old flick reunites legendary funny man Jim Carrey and "Newsroom" star Jeff Daniels as the lovable and idiotic Harry and Lloyd.

While critics largely bagged on the film, it seems the nostalgia was too great for "Dumb and Dumber To" to fail.

YOUTUBE / JEREMYJAHNS: "Dumb and Dumber is a nostalgic cult classic to a lot of people."

YOUTUBE / CHRIS STUCKMANN: "Every kid my age was like 'Dumb and Dumber' is the greatest movie ever made."

IGN: "'Dumb and Dumber To' functions as an amusing trip down nostalgia lane."

And Forbes writer Scott Mendelson reasons that nostalgia is the only reason this film exists in the first place, "The cultural arbitrators are the ones who grew up in the 1980's and 1990's, so it stands to reason that they see said properties with a nostalgia-tinged glow that also leads them to think that the genre films of their childhood are inherently superior to anything that might drop today."

But even for those who disliked the film, I think we can all agree "Dumb and Dumber To" is not the worst in the franchise.

"I will scan you for injuries."

"Big Hero 6" continues to do well at the box office just barely falling behind "Dumb and Dumber To" and bringing in an estimated $36 million.

After two weekends at the box office, "Big Hero 6" has made an estimated $111 million, marking an important milestone for Disney.

"There's one other name you might know me by: Star-Lord."

On the backs of "Guardians of the Galaxy," "Captain America: The Winter Soldier" and "Maleficent," Disney has hit $4 billion in annual box office sales for the second time in history. The first time was last year when parents worldwide let go more than $1.2 billion worth of movie tickets. (Video via Walt Disney Animation Studios / "Frozen")

"This world's a treasure but it's been telling us to leave for a while now."

And rounding out the top three is "Interstellar" bringing in an estimated $25 million in its second weekend. While Christopher Nolan's sci-fi thriller has lost to "Big Hero 6" two times now in U.S. theaters, Interstellar has been about $120 million more successful overseas.

As for next week, Katniss Everdeen puts two hours between you and another cliff-hanger. It's called "Mockingjay Part 1", people.