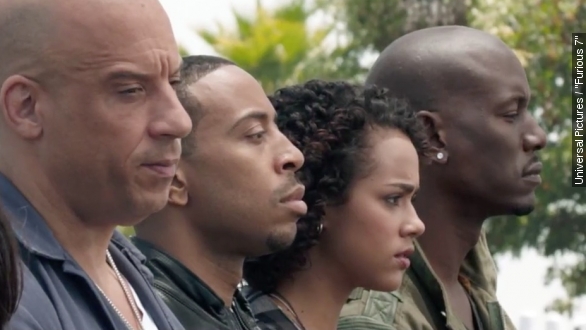 "Furious 7" takes the top spot this weekend, bringing in an estimated $143 million. That figure places "Furious 7" among the top debut weekends ever.

I just want to say this out loud: If you are inside a car and said car falls out of an airplane, you will die. I'm sorry; I just really needed to get that off my chest.

"Furious 7" takes the top spot this weekend by a landslide, bringing in an estimated $143 million. That figure places Vin Diesel and company among the top 10 opening weekends of all time right behind "Spider-Man 3" and right in front of the second "Twilight" film.

And considering the $143 million debut was the largest ever for the 14-year-old franchise, you can be sure the box office gross for this film will at least be on par with past totals.

Oh, and if you're wondering, combine that domestic total with global ticket sales, and you get a $384 million worldwide debut. That's the fourth largest in box office history.

But aside from the box office success, what's really fascinating about this film and about this franchise is the critical response.

IGN's Roth Cornet says: "The film hits every note necessary to satisfy fans. Cars are flung from every conceivable height and defy gravity at every turn."

"Fast and Furious" drops cars out of planes, pits tanks against Camaros and still dares critics to turn away. The incredibly unrealistic action just keeps rising and so does the Rotten Tomatoes score.

Next up, Rihanna makes a kids movie. Yep, that Rihanna. (video via Def Jam Recordings / Rihanna)

“Home” didn’t score very well among critics with many calling the kids movie unoriginal, but the unlikely pairing of Jim Parsons and Rihanna seems to be keeping audiences satisfied.

What may be even more satisfying for the somewhat struggling Dreamworks studio: "Home" is the the only animated kids movie scheduled between now and mid-June, when Disney Pixar's "Inside Out" hits theaters.

"Home" only saw a 47 percent drop in ticket sales in its second weekend, which is more than you can say about Kevin Hart and Will Ferrell's latest venture.

Rounding out third place with a somewhat disappointing $12.9 million weekend is "Get Hard," proving that a big opening is just that: an opening.

Will Ferrell and Kevin Hart made all the rounds to promote this film before its release. Ferrell was in especially rare form, making the late-night rounds. The tireless promotions proved to be great for the terribly reviewed comedy's first weekend. (Video via ABC)

But it seems the hype can last only so long for a movie with such bad reviews. "Get Hard" saw a 62 percent drop in ticket sales for its second weekend.

As for next week, hankering for a good cry? Well, you're in luck. (Video via 20th Century Fox / "The Longest Ride")