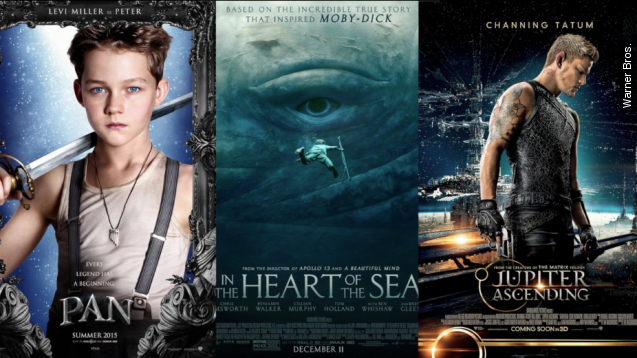 Flop once, shame on the studio. Flop two or three times and you might be forced to play Thor for the rest of your career.

Katniss Everdeen has been at the box office for four weeks, and for four weeks she’s taken the No. 1 spot. “The Hunger Games: Mockingjay-Part 2” brought in an estimated $11.3 million.

The only other "Hunger Games" film to stand atop the box office this long was the original, which also spent four weeks at No. 1 before falling in week five.

But "Mockingjay" should really savor every moment as the No. 1 movie in America because this will be its last week at the top of the box office. (Video via Walt Disney Pictures / 'Star Wars: The Force Awakens')

A disappointing debut for Ron Howard’s “In the Heart of the Sea.” It brought in an estimated $11 million this weekend. That’s especially bad when you consider the nearly $100 million Warner Bros. spent to make the film.

"Star Wars" won't hit theaters for another six days, but many would argue the countdown for the Force to return started a week ago.

Forbes' Scott Mendelson called "In the Heart of the Sea" “a pre-Star Wars sacrificial lamb” and suggested Chris Hemsworth’s sea tale may have fared better in March rather than the crowded holiday season.

To make matters worse, this isn’t the first flop of the year from Warner Bros. For a studio, big releases don’t get much more painful or expensive than “Pan” and “Jupiter Ascending,” which both came from Warner Bros. this year.

Holding onto the third spot is Disney Pixar’s “The Good Dinosaur” with an estimated $10 million in its third weekend.

As for next week, well, I think we’ve all waited long enough.