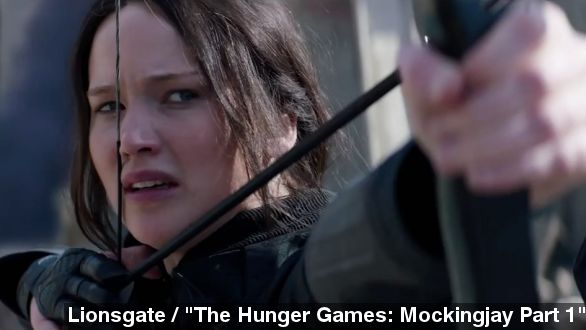 Without beating the first two releases in the franchise, "The Hunger Games: Mockingjay" has the highest grossing weekend of the year.

Another $100 million weekend for The Hunger Games franchise – no wonder they split it into two movies.

Jennifer Lawrence and The Hunger Games still have the magic, taking the number one spot at the box office this weekend and bringing in an estimated $123 million.

And while that does fall short of the first two Hunger Games movies, which both brought in more than $150 million in their opening weekends, the successful weekend still places Katniss Everdeen in a very exclusive club — that apparently only tweens have access to.

"Harry Potter... They boy who lived"

The Hunger Games now joins Harry Potter and Twilight as the third franchise ever to have three $100 million plus opening weekend debuts. It also beats out the last Transformers film as the largest weekend debut of 2014.

As for the movie – much like "Harry Potter and the Deathly Hallows Part 1" and "Twilight: Breaking Dawn Part 1" – it's a 'part one' film and it functions as such with a lot of really well done finale build-up.

As a RogerEbert.com writer points out, "'The Hunger Games: Mockingjay Part 1' also feels a bit stretched out, not to give the actors room to breathe and widen the film's narrative margins to better pack them with detail, but because that's how Hollywood increasingly does big budget "event" franchises these days."

"Big Hero 6" takes the second slot at the box office this weekend bringing in an estimated $20 million and staying in the top three for a third weekend in a row.

Showing a staying power that "Dumb and Dumber To" couldn't pull off – the comedy was kicked back three spots from one to four this week.

"We're not meant to save the world, we're meant to leave it."

And finally "Interstellar" takes the number three spot with an estimated $15 million at the box office. But the story behind McConaughey's latest film remains its overseas performance outpacing the U.S. numbers by the hundreds of millions.

As for next week, the pickings are a little slim this Thanksgiving weekend but here are the options.

"This little one assaulted me."

"He's fightclubbin himself! We got a fight clubber."

Or an animated kids movie.

"You don't have a family and we're all going to die."

"What's a matter with you?"