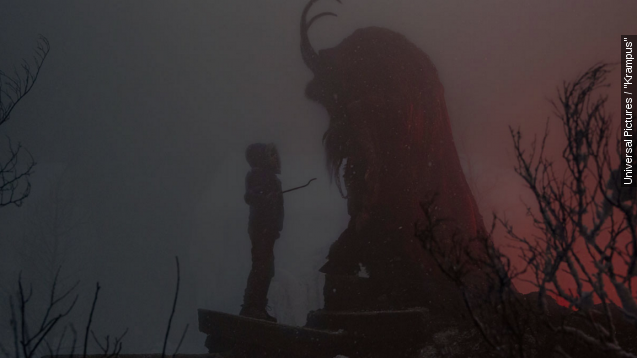 "Krampus" takes the No. 2 spot this weekend with a solid $16 million opening ahead of the extremely crowded holiday movie season.

Well, since you wouldn't go see the jolly Christmas comedies, now you have to watch a hooved, horned creature terrorize a family this holiday season.

But first, "The Hunger Games" final installment continues to dominate the box office. It brought in an estimated $18.6 million and held on to the No. 1 spot for the third week in a row.

"Mockingjay Part 2" is so far the worst performing film of the franchise. That said, it also just passed $500 million in worldwide ticket sales, so yeah, still pretty good.

Taking the No. 2 spot this week is "Krampus," bringing in an estimated $16 million and continuing a Christmas horror movie tradition no one asked for.

And while many films in this odd genre miss the mark, it seems "Krampus" struck just the right chord with audiences and critics.

Perhaps more importantly, the $16 million opening puts "Krampus" in a good position to handle the inevitable blow everyone is gonna face between now and the end of the holiday season.

Before St. Nicholas' Day, Austrians take to the streets as Krampus, a demon who terrifies naughty children.

Aside from the box office behemoth barreling toward the movie theater two weekends from now, there will be another nine nationwide movie releases between now and Christmas Day. So even if “Krampus" doesn't sell one more movie ticket, Universal Pictures has already broken even.

Holding on to the No. 3 spot is "Creed," bringing in an estimated $15 million in its second weekend out. While "Creed" doesn't (and never did) stand a chance at taking the No. 1 spot at the box office, its critical praise has come from all corners.

"It is gritty, it is powerful, and I think it's actually one of the best movies of 2015," Scott Mantz of Access Hollywood said on "What The Flick?!"

Which many believe will help the film keep a spot in theaters through the crowded holiday box office.

As for next week, Thor trades his hammer for a harpoon.