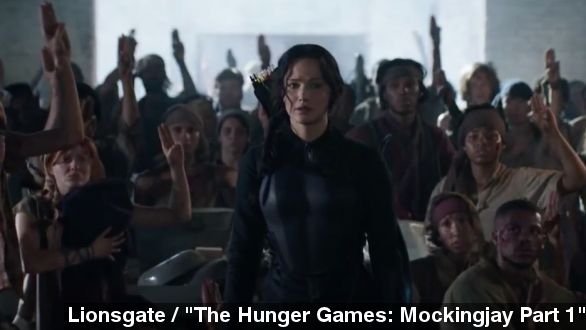 For the second weekend in a row "The Hunger Games: Mockingjay - Part 1" soared over all challengers to the number one spot at the box office.

After packing on the pounds on Thanksgiving, many Americans waddled their way to the movies this weekend but not to see anything new.

"It's the things we love most, that destroy us."

For the second weekend in a row "The Hunger Games: Mockingjay - Part 1" soared over all challengers to the number one spot at the box office bringing in an estimated $56 million — $30 million more than the number two movie this weekend.

While "Mockingjay" caught some bad press for not pulling in the same weekend numbers that its two predecessors did, much of that talk has been put to bed with the impressive Thanksgiving weekend haul.

Of all five-day Thanksgiving openings, "Mockingjay" had the third best numbers ever, behind "Frozen" and "The Hunger Games: Catching Fire."

But there wasn't much competition for Katniss. "Horrible Bosses 2" – one of two nationwide releases out this Thanksgiving – didn't even crack the top three, opening at fifth behind "Interstellar," which came out four weeks ago.

Number two at the box office: the spin-off movie that all "Madagascar" fans were anxiously waiting for??

"We've arrived in the center of Dublin, Ireland."

The "Penguins of Madagascar" — though it has solid reviews — had a modest $25 million weekend. According to Variety, initial estimates placed the penguins' weekend closer to $30 or $40 million.

The "Penguins of Madagascar" scored a 53 on Metacritic which seems to hold true among critics. While some think it was hilarious ...

"Alonzo and I are sitting in the movie theatre, cackling our heads off!"

... others say it doesn't deliver. "The Penguins of Madagascar is fine if your head doesn't reach above the seat in the theater."

One of the major problems for the penguins is right across the hall where "Big Hero 6" is still dragging kids and families out of Madagascar and into San Fransokyo.

"Big Hero 6" remains in the top three for its fourth week in a row bringing in an estimated $18.7 million. That places its worldwide box office total at $224 million. It also holds up as one of the highest rated films at the movies with a 94 rating from moviegoers on Rotten Tomatoes.

We won't see any major nationwide releases next week, but, if you haven't already, check out new teasers for two of the most anticipated films of 2015.

"You just went and made a new dinosaur? Probably not a good idea."

And the force finally awakens – probably due to all the nerds screaming.