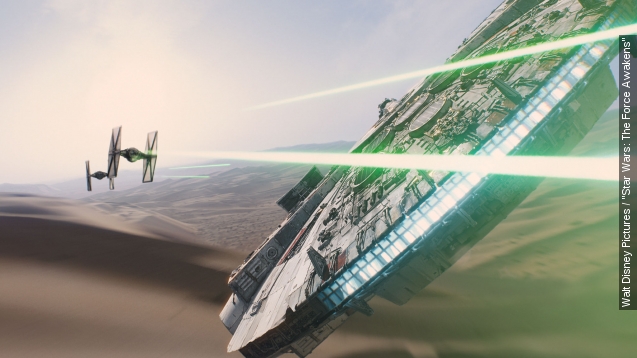 "Star Wars: Episode VII" brought in an estimated $238 million. That’s the best domestic debut of any movie ever, and the records don't stop there.

I would love to say something snarky about the most anticipated movie of the year having a misstep, but ... I've got nothing. The force is strong with this one.

Taking the No. 1 spot this weekend and demolishing almost all box office records in its path was "Star Wars: The Force Awakens." It brought in an estimated $238 million. That's the best domestic debut of any movie ever.

That beats the former record holder "Jurassic World" by nearly $30 million — which, by the way, is more money than "Sisters" and "Alvin and the Chipmunks" brought in all weekend.

But the records don't stop there. Episode seven of this iconic space epic broke a record at seemingly every phase of its journey.

"Star Wars" smashed Fandango's record for presale tickets by bringing in more than $100 million before it opened.

Then, all the super fans dressed as Chewbacca, Luke and Leia helped "Episode VII" make $57 million in Thursday night showings: another record.

And with a $57 million Thursday, it was almost inevitable that "Star Wars" would break the single-day box office record previously held by "Harry Potter and the Deathly Hallows: Part 2."

But "Episode VII" has an even bigger milestone in its sights. "Avatar" stands alone as the highest-grossing film of all time, with $2.7 billion worth of tickets sold.

Also impressive: the quality of the film. Good word of mouth could push Episode VII toward that all-time highest- grossing record.

With a 95 percent Rotten Tomatoes score and more than a half a billion dollars in the bank, "The Force Awakens" could call it quits right now and be a monumental success. But it's only opening weekend.

Taking the No. 2 spot on "Star Wars" weekend is "Alvin and the Chipmunks: The Road Chip," bringing in an estimated $17 million.

Tina Fey and Amy Poehler's "Sisters" rounded out this one-sided weekend, bringing in an estimated $14 million.

As for next week, movies. So many movies.