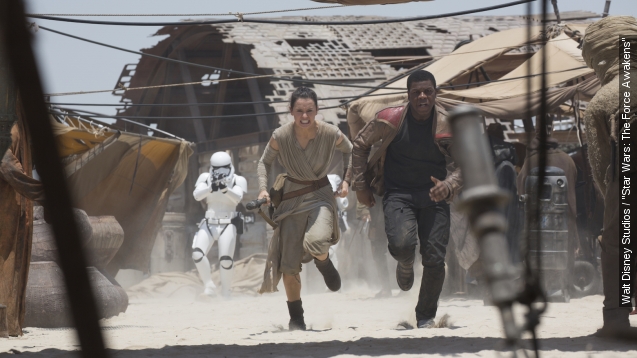 Despite all the box office records left in the dust, "Star Wars" still has a way to go before it's what some would consider the "true movie champion."

Here’s a stat for you: “Star Wars” has had the biggest first, second and — now — third weekend in box office history. The box office records just keep falling.

Three weekends in, “Star Wars” hasn’t even broken a sweat. It brought in another $88 million and managed to pass up one of the most iconic movies in American history for total haul.

Before the weekend even got started, “Star Wars” flew past "Titanic" to take the spot as the second highest grossing domestic film ever. Let’s not forget: On the way to that record, it passed "Jurassic World" and "The Avengers."

Also, considering the Force has only been awake for three weeks, it's only a matter of time before “Star Wars” takes “Avatar"’s spot at the tip-top of the all-time domestic box office list.

If you look at the movies set to hit the box office between now and next week, it's smooth sailing for BB-8 and company.

That said, “Star Wars” does have a ways to go before it's — what some would consider — the “true champion.”

If you adjust for inflation, “Gone with the Wind” holds the all-time domestic title by a pretty wide margin, while the original “Star Wars” sits at No. 21 on that list.

And now that I’ve bent over backwards to bring “Star Wars” down a peg, let’s move on.

Holding on to the No. 2 spot with a great second weekend is “Daddy’s Home” bringing in an estimated $29 million. Having brought in $38 million last weekend, the 25 percent drop in ticket sales is an impressive show of legs for the Ferrell/Wahlberg comedy.

Quentin Tarantino’s “The Hateful Eight” finally gets its nationwide release, bringing in an estimated $16 million.

While no one questions how glorious the 70 millimeter format is, critics are (as usual) split on Tarantino’s effectiveness, claiming he's starting to parody himself.

“There are some story elements that feel overly familiar, as if Tarantino is cannibalizing from his own filmography,” IGN's Jim Vejvoda said.

“It’s a very Tarintino-ey Tarintino movie in that, yeah, they do talk incessantly,” Christy Lemire said on What the Flick?!.

But let’s be honest, as much as critics love to discuss Tarantino, I think we can all agree no one cares less about what we have to say than the man himself.

As for next week, Leonardo DiCaprio gets lost in the woods and attacked by a bear all in hopes the Academy will hear his cries for help.