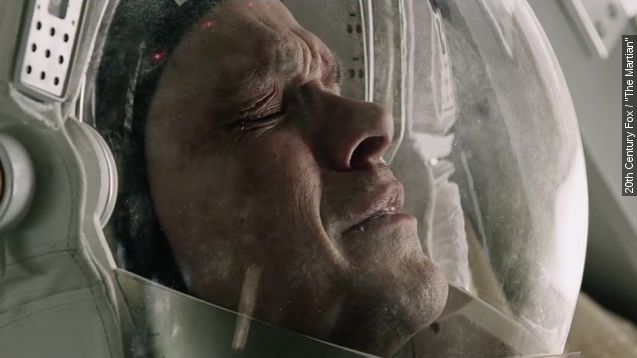 "The Martian" came close to breaking the record for biggest October box office debut — which is held by 2013's lost-in-space film "Gravity."

Well, after one dangerous trek through Europe and two long voyages to outer space, I think we can definitively say: Don't go anywhere with Matt Damon. Because not only is he going to get lost, it's really gonna suck trying to pick him up.

Taking the No. 1 spot this weekend and just barely missing a box office record is "The Martian," which brought in an estimated $55 million.

"The Martian" came dangerously close to stealing the record for biggest October box office debut — which, ironically, is held by 2013’s "Help I’m Lost in Space" film, "Gravity." "Gravity" holds onto its record by a measly $700,000 or so.

And the similarities don’t stop there. Both films were released on the first weekend of October both films also serve as the second biggest debuts ever for their leading man and woman.

And both films have done remarkably well with movie critics.

"You can say shades of 'Cast Away' and 'Apollo 13,' and I might have liked this movie better than both of those films," Mark Ellis of SchmoesKnow said.

"'The Martian' lives and dies on the back of Matt Damon's performance, and he is fantastic," IGN's Daemon Hatfield said.

For a film that chronicles a man being stuck on Mars, Damon along with director Ridley Scott keeps the audience laughing throughout, which many have called "The Martian"'s secret weapon.

And some good cheer from Mr. Damon is great because there damn sure wasn’t any to be found in "Interstellar."

Taking the second spot this week is "Hotel Transylvania 2," with an estimated $33 million, bringing its domestic total to $90 million after just two weeks.

Along with the encouraging box office haul, "Hotel Transylvania 2" had just a 32% drop in ticket sales its second weekend out – showing the film has some staying power with moviegoers.

After two weekends in less than a hundred theaters, "Sicario" has moved to wide expansion and, as a result, brought in an estimated $12 million this weekend.

"Sicario" boasts rave reviews across the board and seems to be a hit with moviegoers – with a 93% approval rating on Rotten Tomatoes and an audience score that’s just a high.

We can assume that audience score doesn’t include the mayor of Juarez, Mexico, who is calling for a boycott of the film.

Juarez is where the fictional action in "Sicario" takes place. This being a film detailing drug cartels and violence at the border, you can imagine it doesn’t reflect very well on the Mexican city. (Video via VICE)

Either way, with a $25 million worldwide total, "Sicario" is well on its way to being a theatrical success ... with or without the city it supposedly takes place in.

As for next week, the boy who never grows and won’t stop making movies.