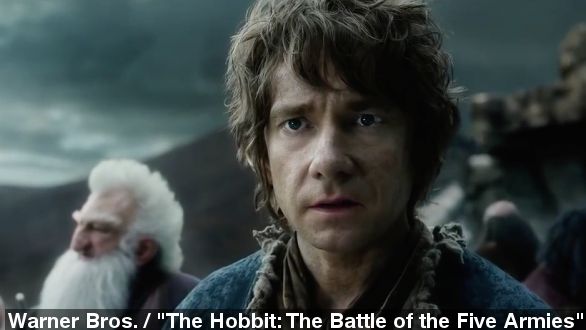 Despite four wide releases on Christmas Day, Peter Jackson's final installment in the 'The Hobbit' trilogy once again held off all challengers.

Warner Bros. / "The Hobbit: The Battle of the Five Armies"

In the last box office weekend of 2014, theaters were packed with millions of moviegoers giving studios around the country a great ending to a pretty bad year.

"Will you follow me? One last time." (Video via Warner Bros. / "The Hobbit: The Battle of the Five Armies")

Despite four wide releases on Christmas Day, Peter Jackson's final installment in "The Hobbit" trilogy once again held off all challengers, bringing in an estimated $41 million and putting its domestic gross over $168 million.

And while "The Hobbit: Battle of the Five Armies" is doing great in U.S. theaters, it's bringing in even better numbers overseas with a foreign total of $405 million.

A solid weekend for "The Hobbit" is just one of many success stories during the holidays. "Annie" saw a 4% increase in sales over last weekend, "Night at the Museum" had a 20% increase and "The Hunger Games: Mockingjay - Part 1" jumped 26%.

Plain and simple – when all the gifts were opened and the kids were tired of their new toys, people went to the movies — and we're assuming Hollywood wants to keep it that way.

"Each prisoner will teach him this lesson. Harder! Harder!"

Doing surprisingly well this holiday weekend is Angelina Jolie's passion project "Unbroken," which brought in $31.7 million despite not being a very jolly two hours.

Forbes writer Scott Mendelson says the lack of competition for adult eyeballs helped propel the film, "Unbroken is banking not just on Oscar buzz but by being a feel-good/inspirational choice for large groups of moviegoers over the long Christmas holiday stretch."

But critics seem split on what to make of the World War II drama. For all the bad reviews out there, there are just as many gushing over the inspirational tale.

"I highly recommend 'Unbroken.' ... This season, this is one to see. "Unbroken" is one of the best pictures of the year." (Video via Deadline)

With so many mixed reviews on the film, the supposed Oscar buzz may be a little overblown. But the one thing in the film still holding up is Jack O'Connell's portrayal of the Word War II vet. (Video via AMC Theaters)

"We just kind of focused on the reality of what we're portraying."

"Someone has to shield you from the wood." (Video via Walt Disney Pictures / "Into the Woods")

Coming up just behind "Unbroken" is Disney's retelling of "Into the Woods," which brought in an estimated $31 million over the holiday weekend.

The Disney movie comes from a classic 1987 musical which was much darker and less kid-friendly than this PG Christmas release. But in trying to stay true to the play, some feel the movie lost its Hollywood appeal and goes on one act too long.

"I get it, I'm buying it and I'm enjoying it. But then the movie does something it shouldn't have done. It keeps going." (Video via YouTube / Jeremy Jahns)

A Time writer says the adaptation to the silver screen was bound to be tricky. "This harsh break in tone, from Happy to After, can work fine in the theater. ... But Hollywood movies are meant to satisfy expectations, not subvert them."

As for next week, nuns scare children because sometimes art imitates life. (Video via Relativity Media / "The Woman in Black 2: Angel of Death")