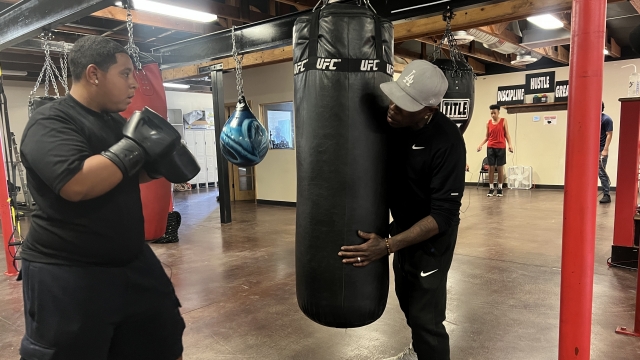 In the streets, dreams are dictated by determination, but temptation can lead young minds down the wrong road.

Robert Barnes knows from experience that one has to fight for a brighter future in underserved communities where many kids are impacted by the mental health crisis and lack of services.

Determined to create change, Barnes opened R.O.C.K. Foundation in 2020. The name is an acronym for Reaching Our Community and Kids.

The nonprofit on the south side of Phoenix is providing support to prevent kids from falling victim to the streets.

"The community that we serve here is very in the hood," Barnes said. "A lot of parents over here are on a fixed income."

He also says kids in the neighborhood are often exposed to drugs, violence and gangs. But one punch at a time, 14-year-old Andre Medina is fighting for greatness.

"It keeps me out of gang activity, you know, different things like that," he said.

For others, boxing helps balance fears and frustrations.

Twelve-year-old Brianna Moore said she struggled with being bullied in school, but boxing has been an outlet to let out her frustrations.

"Sometimes I feel mad because I think about everything that has happened, so I let it all out," she said.

The program's founder told our sister station boxing can help the young men and women he works with open up about what's really bothering them.

Every kid who walks into R.O.C.K. Foundation is fighting an internal battle, and that's why Barnes shares his struggles of growing up in Compton, California — a neighborhood riddled with crime.

At a young age Barnes joined a gang, and by 16 he dropped out of school. The street life led him to a home with a revolving door.

Barnes lost his brother and both parents, but he fought to get his life back on track. Now he's fighting for his neighborhood family and helping them seek fulfilling careers by collaborating with other organizations to hold food drives. He also added career days and books to help sharpen reading skills.

The gym charges a monthly fee determined by the parents' financial situation, but Barnes admits he's struggling to keep the lights on and doors open.

He's now turning to the community, seeking donations of anything from treadmills to boxing gloves. But despite hard times, Barnes is a fighter who doesn't go down easily.