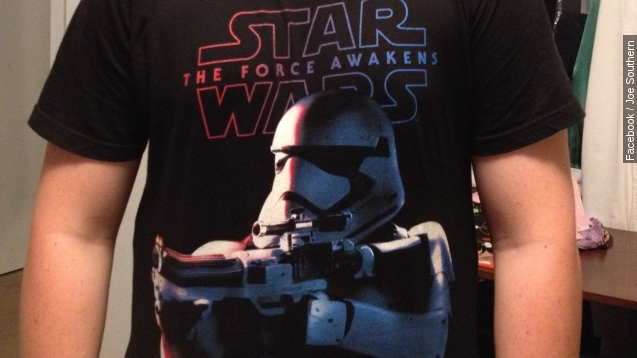 A junior high school in Texas told a student to cover his "Star Wars: The Force Awakens" shirt because the Stormtrooper was carrying a gun.

See anything out of the ordinary on this shirt? Seems like your run-of-the-mill "Star Wars" shirt — something we're seeing a lot of because of this:

"I will finish what you started," a character in the "Star Wars: The Force Awakens" trailer said.

"The dark side," another character said.

But Joe Southern says his son Colton came home from George Junior High School in Texas and said he couldn't wear his "Star Wars" shirt anymore because the Stormtrooper is holding a gun.

Yes, it's technically a gun. But let's point out it's not a gun that actually exists in the real world.

According to the school's student handbook, the dress code forbids clothing that "contains language or symbols oriented toward violence."

Southern mentioned on Facebook his son had worn the shirt many other times with no problem, and that his son is a model student.

"It's political correctness run amok. You're talking about a 'Star Wars' T-shirt, a week before the biggest movie of the year comes out. It has nothing to do with guns or making a stand," Southern told KTRK.

Local outlet KTRK reports Colton wasn't punished by the school, but was asked to zip up his jacket to cover the shirt.

This video includes an image from Facebook / Joe Southern.