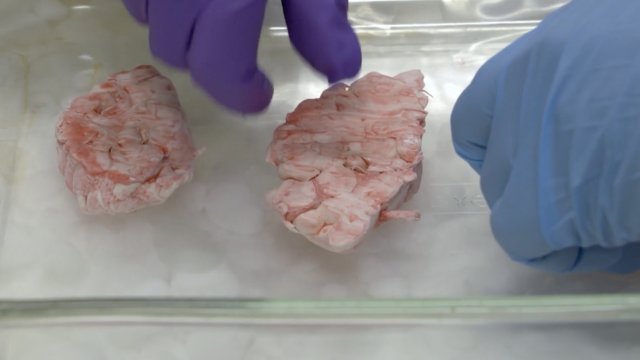 There are more than 80 brain banks housing tens of thousands of brains across the U.S. One near the border is studying Hispanic brain health.

Inside a hallway of humming freezers in El Paso, Texas, are 350 brains, full of potential answers about what happens in the brain of someone with a mental illness like PTSD or depression.

Dr. Bharathi Gadad co-runs the bank and lab, which is focused on biological psychiatry, meaning they're looking to answer what role the physical nervous system has in the way someone with a mental illness behaves.

Sections of a donated lobe, bright pink in color, are flash frozen within a couple of hours of being received. They're cataloged, packed and set on ice, then kept at minus 80 degrees at all times. If it warms 20 or so degrees, an alarm goes off. They cannot be allowed to thaw.

But the brain bank and the lab's location on the U.S.-Mexico border is what's really key. The research there could help close the science gap that has historically left Hispanic people behind.

"This area is fully flooded with Hispanic community, so we as the Southwest Brain Bank, I would say 70 to 80% of our brains are Hispanic," Dr. Gadad said.

Minorities represent less than 30% of those enrolled in National Institutes of Health-funded clinical trials, according to a recent NIH report. Latinos made up less than 7.6% of trial participants.

It's the same story with mental health help.

According to the Substance Abuse and Mental Health Services Administration, about 35% of Hispanic or Latinx adults will seek out treatment or help in their lifetime. That's lower than the average for U.S. adults, which is about 46%.

Several factors and barriers could be to blame, including access to health care, finding a culturally competent provider, health insurance, language barriers and stigma.

What Will It Take To Create An Artificial Brain?

A computer modeled after the human brain could deliver the best of both worlds — but our most unique organ is fiercely complex.

Alejandra Ruiz-Velasco is part of the small but mighty team of Southwest Brain Bank researchers who carry a deep compassion for the humans behind their samples.

"If we're talking about the average Hispanic, which is an immigrant, I would assume they're trying to make ends meet," Ruiz-Velasco said. "They're working the 12 hour shifts just to feed their families, so when do they have time to seek help?"

Each month, the bank gets one to four brains. At times, getting clearance from a family to donate their deceased loved one's brain to science is a heavy ask.

For Ruiz-Velasco, there's a calling there; she moved to El Paso for it.

"My grandmother, she has dementia," Ruiz-Velasco said. "I'm so grateful to still have her. She's lived a great life. There's a possibility that I carry the gene to have dementia. I hope that my children don't encounter that, or my grandchildren."

Dr. Javier Vargas-Medrano, another Southwest Brain Bank researcher, also has a personal impact. His grandmother had dementia too.

"I think she would be happy that someone is trying to make a difference in the life of people that didn't happen when she was alive," Dr. Vargas-Medrano said.

Researchers can't detect a person's ethnicity by just looking at their brain, but with the collection of samples, the Brain Bank can share tissues with other researchers.

That helps in two ways: One being if someone is comparing dementia in the brains of different ethnic groups. Having 300 samples each from White, Black, Hispanic, and Asian people is more accurate than a study that may only have 30 brains each or 10 Hispanic brains compared to 30 White brains. The other would be when someone is studying specific impacts in just Hispanic brains.

With the studies at the El Paso lab, researchers can also look at the differences between Hispanic men versus women, young versus old, or veterans versus civilians.

The squares of frozen brain segments are stepping stones in understanding the bigger picture of brains, with the eventual goal being to find novel biological material that could lead to making a test, similar to the way doctors test for strep throat or COVID.

It's something that gives Ruiz-Velasco optimism and hope.

"I think in my lifetime and in your lifetime, we'll have something," Ruiz-Velasco said.