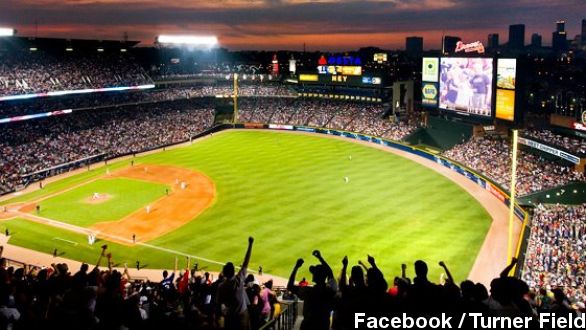 The Atlanta Braves announced plans Monday to move from Turner Field to outside city limits.

The Atlanta Braves won't be playing in Atlanta much longer. The team announced plans Monday to leave Turner Field and relocate outside city limits.

The Braves' current contract at Turner Field ends in 2016 and the team says the new stadium will be ready by 2017. Braves officials say Turner Field needs too many updates that aren't worth it. Braves president John Schuerholz announced the plans. (Via The Marietta Daily Journal)

"Turner Field, which we do not own, is in need of hundreds of millions of dollars in upgrades. Unfortunately, that massive investment would not do anything to improve access or the fan experience." (Via Atlanta Braves)

The stadium needs an estimated $150 million worth of infrastructure improvements, such as updated lighting and new seats, according to Braves officials. (Via CNN)

The Atlanta Journal-Constitution reports Cobb County, where the new stadium will be located, is going to be responsible for $450 million in financing while the Braves will kick in $200 million.

Turner Field was originally built for the 1996 Summer Olympics. Then called Centennial Olympic Stadium, it hosted the opening and closing ceremonies and track and field events. (Via Olympic)

While the Braves might be moving away from Atlanta, team officials say they're not leaving their fan base.

The Braves released this picture on a website for their new stadium, showing where the new stadium will be in relation to ticket purchasers. Every red dot on the map is where someone bought a ticket — meaning the stadium would be more surrounded with well-paying fans.

The Atlanta Falcons are also in the process of moving stadiums and were recently got approval to build a new one to replace the Georgia Dome. That is also expected to be ready in 2017. (Via Sports Illustrated)

The Braves hope this move will help generate more revenue for the team. Turner Field is owned by the city of Atlanta and its future plans are not yet known. The Braves lost to the Dodgers in this year's NLDS.