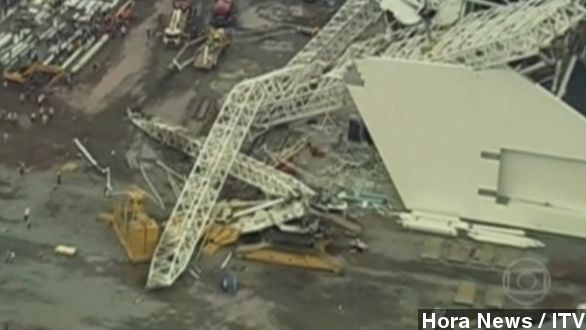 A part of the stadium hosting the 2014 World Cup opener in Brazil has partially collapsed, killing at least three people.

A part of stadium hosting the 2014 World Cup opener in Brazil has partially collapsed — killing at least three people.

Rescue teams are searching for more victims at the stadium in Sao Paulo. Local media report the accident was caused when a crane collapsed on top of a metal structure atop of the stadium. (Via Twitter / @Estadao)

Business Insider says there were reports unstable soil after a rain storm contributed to the accident.

Another journalist reported the part of the structure that collapsed was the last section needed to complete the roof's construction. Workers were celebrating just before the accident. (Via Twitter / @harris_)

O Globo news in Brazil says the $355 million arena was more than 90 percent completed but the damage could set it back months.

The country is facing an end-of-the-year deadline from FIFA to have its venues completed. The BBC reports construction on at least one other stadium won’t be done on time, not to mention a concern of the shortage of hotels for visiting fans.

This latest accident will likely only fuel the critics, who questioned why Brazil was holding the sporting event in the first place — when it was already struggling to pay its bills. (Via FIFA)

When it became clear this summer Brazil was in the running to host the games, thousands took to the streets in violent protests. (Via RT)