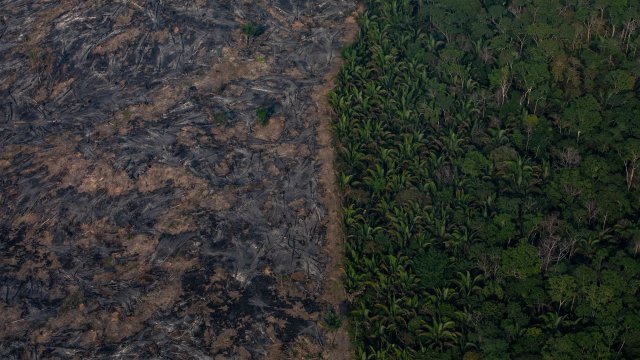 A day after President Jair Bolsonaro turned down aid, a spokesperson said the president is now willing to accept support to fight the Amazon fires.

Just one day after Brazil angrily turned away international aid to help fight fires in the Amazon rainforest, the country's government says it's ready to accept that money — as long as it decides how it's spent.

A spokesperson for President Jair Bolsonaro told reporters Tuesday the president is open to receiving financial support from organizations and countries. But he added, once the funds enter Brazil, they will be under the control of the country's people.

And that could be a big problem. Critics are worried the government won't use the money to preserve the rainforest.

Earlier on Tuesday, Bolsonaro said he would only consider accepting millions of dollars in aid from the G-7 nations if French President Emmanuel Macron apologized to him.

The two leaders have been engaged in a very public spat that started after Macron decided the burning Amazon was "an international crisis" needing immediate discussion at the G-7 summit. He also said Bolsonaro lied about his efforts to fight deforestation.

Bolsonaro wasn't pleased. He accused Macron of insulting him and having a colonialist mentality. And the feud got personal from there. Bolsonaro endorsed a Facebook post that mocked the French leader's wife, a move Macron criticized as "extraordinarily rude."

Meanwhile, a diplomatic source told Reuters Brazil's government had accepted about $12 million from the U.K. to battle the blazes. Bolsonaro's press office didn't immediately comment on that report.