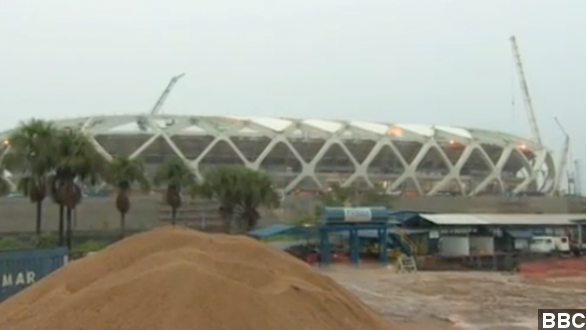 A man in Brazil working to build the stadium for next year's World Cup died after falling from the roof of the construction site.

A man in Brazil working to build the stadium for next year's World Cup died after falling from the roof of the construction site.

Marceludo de Melo Ferreira fell nearly 115 feet. He was taken to a hospital in Manaus, where he was later pronounced dead.

​In a statement by FIFA, soccer's governing body, it confirmed the incident and said, "FIFA ... learnt of the death of the worker on Saturday at the Arena Amazonia site with great sadness. ... We would like to send our most sincere condolences to his family, relatives, colleagues and friends." (Twitter/ @Eurosport)

This is the fifth person to die working on the stadium in the last two years.  Many observers say the pressure to complete the stadium on time might be to blame.

"The stadium in the Amazon jungle is weeks behind schedule ... Just last month, a crane collapsed killing two people at the Sao Paulo stadium where the opening ceremony will be held." (Via ITV)

"As Brazil gets closer and closer to the opening day of the World Cup, there's more pressure and more eyes on the country which many are skeptical will be ready in time." (Via Al Jazeera)

The BBC reports construction on at least one of the stadiums won’t meet it's December deadline, and on top of that there will likely be a shortage of hotels for visiting fans.

The country has already seen widespread criticism in regards to the World Cup. Thousands protested in June over transport fare hikes, and the amount of money spent on the games. (Via RT)

Last week FIFA announced Brazil's stadiums would be ready in time. The World Cup starts in June of next year.