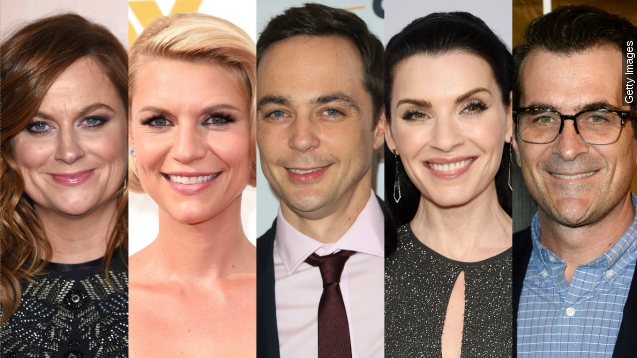 The 2016 Screen Actors Guild Awards nominations were announced Wednesday morning, and as usual, there were a few snubs and surprises.

When the Screen Actors Guild Award nominations were announced Wednesday morning, we noticed the TV group of nominees were relatively the same people nominated at the Emmys. But there were a few exceptions.

Jon Hamm, Bob Odenkirk and Kevin Spacey will compete in the Lead Actor, Drama category. But so will Peter Dinklage, who won the Outstanding Supporting Actor award at the Emmys for his role on "Game of Thrones."

Also receiving his first nomination for "Mr. Robot" is Rami Malek, who will go up against those awards vets.

In the Lead Actor, Comedy competition, Ty Burrell, Louis C.K., William H. Macy, Jim Parsons and Jeffrey Tambor will all face off for the funny man award. Reigning Emmys Lead Actor in a Comedy, Parsons, was snubbed at this year's Emmys.

Amy Poehler has another shot at beating "Veep"'s Julia Louis-Dreyfus in her victory lap for "Parks and Recreation." At this year's Emmys, Louis-Dreyfus beat out Poehler for the Lead Actress, Comedy prize.

Both "Louie" and "Parks and Recreation" were snubbed in the Outstanding Performance by an Ensemble in Comedy this year.

The SAG Awards air Jan. 30 on both TNT and TBS.