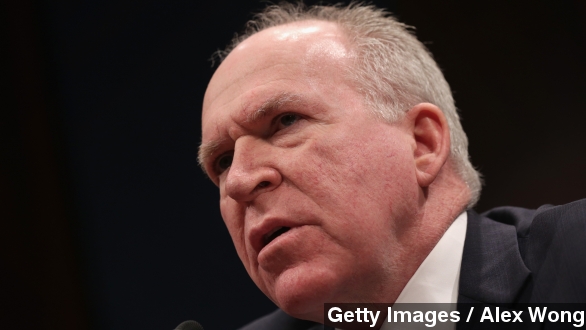 Merits of so-called "enhanced interrogation techniques" aside, this might have been the biggest takeaway from CIA Director John Brennan's press conference Thursday.

"The cause-and-effect relationship between the use of EITs and useful information subsequently provided by the detainee is, in my view, unknowable," Brennan told reporters in a prepared statement.

Put another way, according to Brennan, it's not clear whether interrogation tactics critics call torture produced any useful information.

That's a big deal because you could argue if the ends don't justify the means, then the means aren't justified. And that's a point neither the White House nor Brennan himself denied.

But he drew a line between what he characterized as a rare few and the justifiable actions of most agency officers. The ones using the most — in his words — "abhorrent" tactics were not authorized to do it. (Video via Fox News)

"We fell short when it came to holding some officers accountable for their mistakes," Brennan said.

But Brennan defended his agency at times during the press conference. At one point, he called the post-9/11 interrogations "uncharted territory" for the CIA; an agency meant to gather information was later directed by President Bush to house and interrogate detainees, despite having little experience doing so.

"I think by just a review of the documentary evidence, all the documents that were guarded by the agency, it loses … you lose the opportunity understand what was taking place at the time," he said.

Feinstein and the Senate Intelligence Committee released this report Tuesday — which most in the media dubbed in shorthand "The CIA Torture Report." It details the Bush-era interrogation techniques following the 9/11 attack. Those techniques include, but weren't limited to, sleep deprivation, waterboarding and rectal rehydration.

"The president needs to purge his administration of high-level officials instrumental to the development and running of this program. For Director Brennan, that means resigning," Sen. Mark Udall said on the Senate floor.

The fallout included, as you just heard, calls for Brennan's resignation — which probably isn't likely considering the White House keeps reiterating its support for the embattled director. Brennan had also served as director of the National Counterterrorism Center under President George W. Bush. (Video via The Telegraph)