U.K. And EU Still Need To Figure Out Their Post-Brexit Relationship 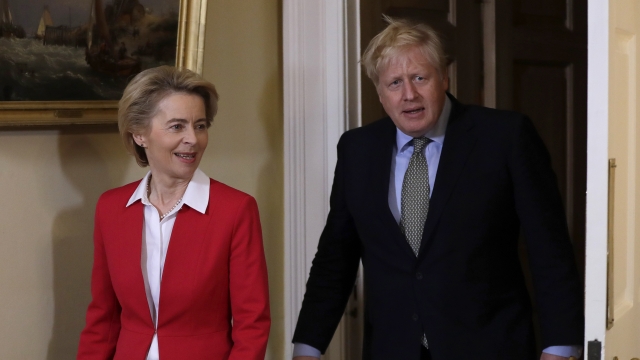 The U.K.'s official exit from the EU kicks off a new round of tough negotiations on what the country's future relationship with Europe looks like.

Brexit is finally a done deal — but the U.K. and the EU still have a lot of work ahead of them. Here's a look at some of the thornier issues awaiting trade negotiators once the U.K. formally leaves the bloc on Jan. 31

Fishing rights are expected to be a major point of contention right off the bat. Up until Brexit, the U.K. shared its fishing waters with other EU countries under a quota system from the European Commission.

Brexit lets the U.K. rewrite the rules on who fishes in its waters — which could potentially leave the European fishers out in the cold. Maintaining access is a major priority for some EU countries going into the trade talks.

The EU has bargaining chips of its own, including market access for U.K. financial firms, which rely on the EU for over 40% of their service exports.

U.K. banks are looking for "equivalence" rules from the EU that will allow them to keep doing business easily in the bloc. But the EU isn't guaranteed to give them that access — particularly if it loses out on the fishing talks.

The two issues are representative of the larger questions hanging over the U.K. and EU relationship: namely, how far the U.K. wants to split from EU rules and regulations. A larger gulf will create friction on both sides, but could potentially give the U.K. new opportunities in other trade relationships, like with the U.S.

The U.K.'s self-imposed deadline for wrapping up trade talks with the EU is at the end of 2020. EU officials have warned that without an extension, they may not be able to negotiate every detail by that deadline.